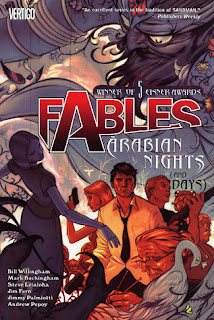 Arabian Nights (and Days) is the seventh installment in the Fables series by Bill Willingham.  As the title suggests, readers are introduced to the Arab world of fairy tales, complete with a genie.  The second half takes a very different turn, following the lives of Rodney and June, two wooden lovers who wish to take a permanent step in their relationship . . . becoming human; however, this forbidden loves comes with a price.

The first half of Arabian Nights (and Days) was difficult for me to fall into like previous issues.  I don't know if it was because I am not as familiar with the Arabian tales or because it was completely different from the previous tales thus far.  Whatever the case may be, I found this part of the story to be a weaker one, though my guess is that it will ultimately prove to be an important one.

The second half of this installment featuring Rodney and June helps to pick up the speed in the story.  It seems like your typical love story between a soldier and one who cares for him; however, the lovebirds are made of wood, complicating their relationship from moving further than a platonic one.  Before the Adversary will grant their wish, Rodney and June must agree to a secret mission . . . one that took this reader by complete surprise!

Though I would consider this book to be the weakest of the series so far, I also believe that it will be a crucial part to the series as a whole.  I cannot wait to see just how important it may be in future issues!

For reviews of the previous installments in the Fables series, click on the links below . . .

Are you familiar with the original Arabian Nights tales?  Would you recommend them?
Posted by Tif Sweeney at 8:00 AM