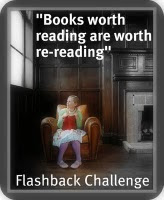 The Flashback Challenge is co-hosted by We Be Reading and BOOKLUST.
The Flashback Challenge will run from January 1, 2010 - December 31, 2010. If you're super-excited and want to reread a book before that, feel free, and let me know. If many people do so, then I'll do a December challenge linky post and you can all link to it here. Otherwise, we can hold them over to January.

You can sign up for the following levels:
Bookworm - Up to three books
Scholar - Four to six books
Literati - Over six books

Within these levels, we have mini-challenges! These are:
1. Re-read a favorite book from your childhood
2. Re-read a book assigned to you in high school
3. Re-read a book you loved as an adult
-----------------------------------
I will be shooting for the Literati level!! I don't have specifics yet, but I'm thinking Harry Potter definitely, then maybe the Hunger Games series before the third one comes out, maybe even Inkheart series as well. I guess we will see when I decide to pick up the books. So, for now, I will leave my list blank and will update as I go.
Posted by Tif Sweeney at 8:40 PM