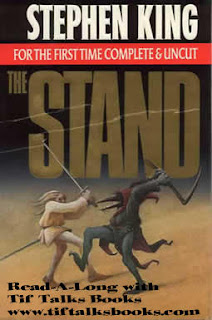 Well, I believe that it is about darn time that I post my wrap-up post for The Stand Read-A-Long that took place during the months of April and May!  I apologize now for all of those that participated (I know that there was at least a couple of you!) for slacking in the read-a-long department.  Next time I host one, I will be a better (and more realistic!) host!!

The whole purpose behind the read-a-long of one of King's epic novels was for me to share in my (re)discovery of the book with others and to determine if my opinion is the same after more than a decade of the original read. In case you missed the check-in posts, here is a quick summary of links:
For those that have read this ginormous book (I'm talking 1200+ pages), you will know that it is packed with emotion, realistic fear, action, and characters that you will love and those that you will love to hate!  In fact, for many of the King fans out there, you may recognize one of the main characters from another of his works, The Dark Tower Series.  Afterall, it is not uncommon for this author to connect all of his works in one way or another, whether it may be a character, a scene, location, or even a vision.  I personally enjoy searching for the connections among his collections, finding the familiarity!
The realistic fear is the basis behind the book, creating a dystopian novel that I believe will go down in history!  People start dropping like flies thanks to a flu leak.  With the outbreak of swine flu this past year, realistic with quarantines on college campuses, this "end of the world as we know it" is not too far fetched!  Ironically, even the swine flu is mentioned in the book!  Thankfully, not everyone is affected by this tragedy, and we get the opportunity to meet and befriend many survivors along the way . . . Fran, Stu, Larry, Tom, Nick, Susan, and Dayna to name just a few of my personal favorites.  The majority of the book follows the survivors and their journey to one of two places . . . Las Vegas, Nevada and Boulder, Colorado.  Those who follow Randall Flagg to Sin City represent the living evil, those who are scared into following or are attracted by the violent ways of the leader.  The others follow Mother Abigail, the epitome of goodness, to Boulder to begin rebuilding America by working together, finding their strengths, and following their hearts and faith.
I remember when I originally read this book, I was so impressed particularly with the character development; however, my one disappointment had to do with the ending.  King spent so much time creating and expanding on his characters . . . something that I think is one of his biggest strengths . . . BUT, the ending was very abrupt.  As I read through the chunkster this time around, I really did not feel that it was as abrupt as I did the first time.  It seemed to make more sense.  The sacrifices made were not short-lived once I considered the journey that certain characters made.  The changes in characters were built for a reason and when certain characters seemed to just disappear, it made more sense to me and it was much deeper than the surface words noted.  Maybe it had to do with my maturity level, maybe it had to do with my better understanding of individuals, maybe it had to do with my ability to look for what was written between the lines instead of just what was written on the page, or maybe it was just where I was in my life during the two different times and these things touched me in a different way.  I don't know.  The point is that the ending simply made sense this time around and I find myself being more appreciative of it many years later.
I really could go on and on about this book, but really I want to get to the whole purpose behind the read-a-long . . . did this book hold up over time?  Was my re-read worth it?  Would I still consider this book one of my all-time favorites?  YES!  I don't know if it holds in my top 5 faves, but it is definitely still in my top 10!  It is the ultimate story of good and evil.  It contains characters that I can relate to and stay with me long after I turn that last page.  The Stand is a book that takes a horrible, fearful tragedy and looks at human nature, how we are attracted to one way or another.  It is a book that can make one examine their own behavior, appreciate what we do have by examining a world where we lose it all, and provide us with hope . . . hope that genuine, good people do exist.
Do you believe The Stand will hold up over time?  What did you think of King's tale?
Additional Reviews:
One Literature Nut
Park Benches & Bookends
Posted by Tif Sweeney at 9:02 PM