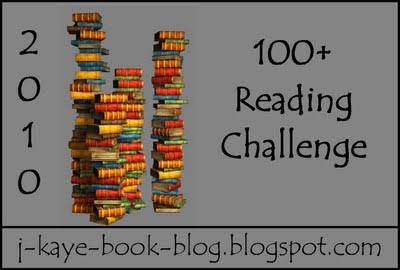 The 100+ Reading Challenge is hosted by J. Kaye's Book Blog.
1. The goal is to read 100 or more books. Anyone can join. You don't need a blog to participate.

2. Audio, Re-reads, eBooks, YA, Manga, Graphic Novels, Library books, Novellas, Young Reader, Nonfiction – as long as the book has an ISBN or equivalent or can be purchased as such, the book counts. What doesn't count: Individual short stories or individual books in the Bible.

3. No need to list your books in advance. You may select books as you go. Even if you list them now, you can change the list if needed.

4. Crossovers from other reading challenges count.

5. Challenge begins January 1st thru December, 2010. Books started before the 1st do not count.

6. When you sign up under Mr. Linky, put the direct link to your post where your books will be listed. Include the URL to this post so that other viewers can find this fun challenge. If you’d prefer to put your list in the sidebar of your blog, please leave your viewers the link to the sign up page. Again, so viewers can join the challenge too.
------------------------------
My goal will be the minimum of 100 books. As I peruse the last couple of years, I have discovered that I have not yet hit this number yet, so 2010 will be the year to do so!
Posted by Tif Sweeney at 8:55 PM