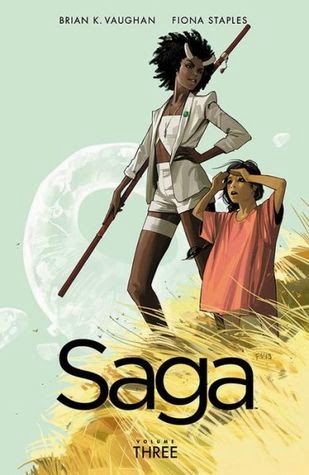 It had been almost a year since I picked up the second volume of Saga.  You could say my Saga time was past due.  Afterall, Volume Two made my Best of 2014 list and Volume One took me pleasantly by surprise.  It really should not have taken me so long to read Volume Three.

Volume Three quickly jumps back into the action of the story of Marko and Alana, two soldiers on opposite sides of an intergalactic war that happened to fall in love.  They are in the midst of searching for their literary hero while their multiple pursuers are getting ever closer.

My personal favorite addition to this series is two young reporters who believe they have stumbled across the story of a lifetime.  Heck, it probably is, but the question remains whether they will be able to pull off such a task. . . especially with so many that are already trying to cover the two lovebirds up.

Saga is a must-read series that starts strong and just keeps getting stronger.  I cannot get enough!

Have you been following Marko and Alana's travels?  What have you thought so far?
Posted by Tif Sweeney at 8:00 AM