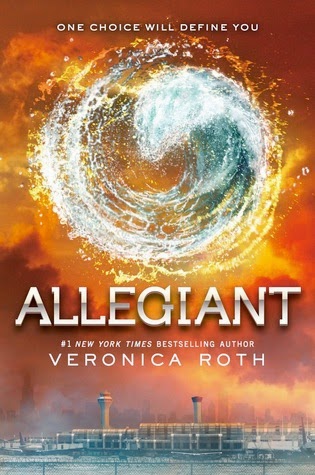 I have no intention of sharing details of Allegiant for fear of spoiling everything for those that have not yet read any portion of the trilogy.  Instead, I will just share a few of my general thoughts . . .

(1) Allegiant switches things up by alternating between narrators (i.e., Tris and Four).  I found this to be confusing, and oftentimes, had to flip back to the beginning of the chapter to remind myself who's head I was in.

(2)  I found the ending to be predictable.  I don't really have a strong opinion in the positive or negative about this ending.

(3)  I found myself taking forever to get through this book.  I could not read Divergent fast enough, but my interest waned as I progressed through the trilogy.

As a quick conclusion, Allegiant was simply okay for me.  I think I began losing my connection with Tris in Insurgent, but it only got worse in this final book.  I enjoyed the mystery of Four, but the enigma of his character faded with the change in narration.  I turned the final page and only felt meh.  I guess I just wanted more.

Were you satisfied by the ending of this trilogy?  Or, were you desiring more like myself?
Posted by Tif Sweeney at 7:00 AM