The Woman in White by Wilkie Collins 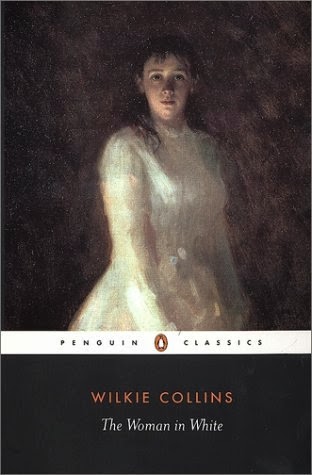 Wilkie Collins is a classic author that I had not heard of until I began blogging.  He was never mentioned in my high school english classes.  His works were never mentioned in my college literature courses.  (I was not an English major, however, so I only took a couple of general courses.)  Even when I took on my own personal goal to read the classics on a regular basis, Collins never graced my shelf.  Thankfully 2014 has been my year to finally discover classic Collins -- first with The Frozen Deep, then with The Woman in White.

The Woman in White has it all -- mystery, mistaken identity, murder, and mayhem.  We follow the life of Mr. Walter Hartright, an artist commissioned to teach a rich man's nieces how to draw.  The night before he is set to leave for his new job, he meets a mysterious woman.  The random encounter fades into the background, but he soon discovers that it may not all be coincidence.  After an unexpected twist, Hartright is forced to take a separate path from his students.  However, they are not to be separated for long after the mayhem ensues.

Collins' tale is very well constructed and deeply thought out.  Minute details become key aspects to his story.  His characters are thoroughly developed, creating strong emotions for the good and the bad.  Personally, my favorite was Marion Halcombe, though Walter Hartright comes in a close second.  I was left guessing at what would come next, and was seldom left distracted or bored.  My only complaint was that I felt Collins was a bit wordy in parts, though the rambling often proved to be worthwhile as I read on.

After reading the final pages, I was left with a number of questions.  Here are a few of the questions that are still floating through my mind . . .

The Woman in White is one of the GREAT classics.  The writing, the story, and the characters are all brilliant.  And, Marion Halcombe is a true unsung hero in classical literature.  In short, I loved it!

Have you enjoyed The Woman in White yet?  What other Wilkie Collins' novels do you recommend?
Posted by Tif Sweeney at 7:00 AM