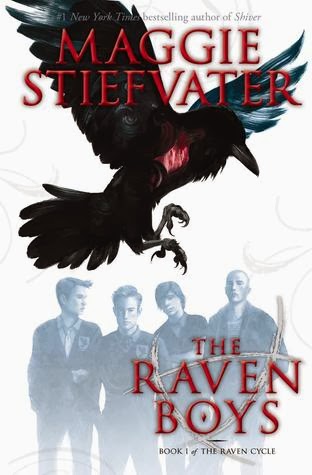 The Raven Boys introduces us to Blue, the daughter of a psychic that yields no powers of her own, except the possibility of making others stronger in her presence.  During the night of the walking dead, a ghost is revealed to her.  The only possibility of a non-seer seeing the dead is one of two things:  (1) the boy is her true love or (2) she kills him.  It is only a short time before Blue meets this mysterious boy by the name of Gansey and his friends, Adam, Ronan, and Noah.  And against her better judgment, Blue and the boys become connected in a friendship like no other, facing both real and unbelievable challenges.

Stiefvater brings us a unique story.  It is paranormal, but it does not include witches and wizards ... well, not really.  Instead, it incorporates magical history, or rather history and magic.  I was hooked from the start by the idea of a true love that kills, a young woman who lives in a psychic household yet holds no power of her own, and a group of rich boys that are much more complicated than their uniforms suggest.

I listened to the majority of this book via audio.  Unfortunately, my book expired a mere 50+ pages from the end, and I had to revert to a library copy to find out how it ends.  I was saddened - not because of the ending, but because I was unable to finish listening to the amazing narration of Will Patton.  Patton is most well-known for his acting abilities in such movies as Armageddon and Remember the Titans.  I adored him in his roles on the big screen, but his talent of narrating books is incredible.  He has skyrocketed to one of my favorite listens, second only to Jim Dale.  I cannot wait to find another audiobook with Patton reading to me.

The Raven Boys is a mesmerizing story and I look forward to the sequel, The Dream Thieves.

Are you a fan of The Raven Boys?  Have you read the sequel yet?  Should I read The Dream Thieves sooner rather than later?
Posted by Tif Sweeney at 7:00 AM