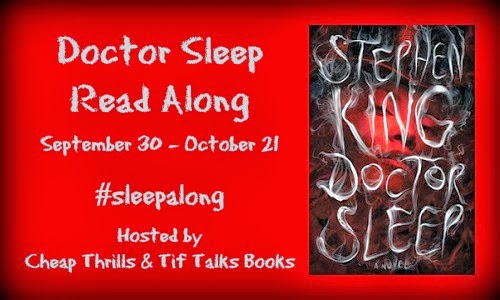 Can you believe it is time to wrap-up the Doctor Sleep Read-along?!?  Before we dive into our final discussion, let's review the previous conversations that we have had along the way . . .

As you can expect at this point in the conversation, there will be MAJOR SPOILERS in this post!  If you have not yet read Doctor Sleep by Stephen King, then DO NOT PROCEED!  For those that have finished the book, read on and share your thoughts!

Before we started reading, we asked if you had any expectations for Doctor Sleep.  Did you get what you were hoping for out of the book?

As I mentioned in the kick-off post, I was really going in with an eye on how Dan(ny) and King himself have evolved and transformed over the decades since The Shining.  I definitely got my answers.  I think both grew in multiple ways, some good and some not so good.  It was a journey that took me for a ride and when I read the final page in Doctor Sleep, I felt I got more than I bargained for and had ever expected from a sequel to the winter at the Overlook Hotel.

Having finished the book, do you think having read The Shining is important for enjoying this one?

When asked this question previously, I said that I think that a reading of The Shining would be helpful to ensure that the reader is in the know of all the details along the way.  After finishing the book, I stand by my opinion.  Minor details are referenced throughout the book; some are noted by King, but not all of them.  Readers can get by without knowing all of these details, but definitely do not rely strictly on the movie before diving into Doctor Sleep.

In one word, one phrase, one sentence ... describe Doctor Sleep.

Redemption.  Characters made poor choices along they way.  They got themselves into bad situations.  It is likely that more will come even after the ending of this book.  BUT, Danny redeemed himself.  Jack Torrance even redeemed himself.  In the end, the good won against the evil and they did it in a redeeming and brilliant way!

Anything else you feel like discussing about the end of the book?  Or, about the book as a whole?

I have a few different things I want to chat about, so I will try to make it short and to the point . . .

(1)  Who else was completely blown away by the blood connection between Dan and Abra?!?  I was totally not expecting this and I literally had to re-read this part of the book a few times before I could move on.  It made complete sense and I loved it!!

(2)  What the heck is going to happen to those who left the True Knot?!?  What about the story that came before for this group?  We really only get a small glimpse into the lives of this creepy group, and I was left yearning for more ... like if they will try to come after Abra again and again since some still remain out roaming the roads in their RVs.

(3)  I had tears in my eyes at the appearance of Jack Torrance at the end of the story.  It was such a beautiful twist to the tale, softening the character that so many have come to loathe and hate in popular culture.  I think this was my favorite part of the entire story!

(4)  In many of King's past novels, I tend to believe that his endings are weak.  They often feel rushed and do not equal the build-up of the world and characters that he creates within the rest of his stories.  With Doctor Sleep, I did not have this feeling at all.  I felt full and complete when I read the last page.  Do you feel that this is King evolving as a writer or something else?  (Side Note:  I have read a lot of King and he still stands as one of my favorite authors specifically because of his ability to develop amazing characters.  Most of what I have read is his older stuff, so I'm curious about thoughts for those that have read more of his recent work.)

Be sure to click on over to Charleen's site for her answers to these questions.  As always, we encourage you to share your thoughts in the comments section or by sharing a link to your own site.

Do you have any final thoughts about Doctor Sleep?  How about Stephen King in general?