The Most Dangerous by Terri Fields 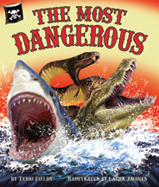 Have you ever wondered what the most dangerous being would be in the animal kingdom?  Would it be a venomous snake or a great white shark?  Would poison or sharp teeth help to win the title of The Most Dangerous?  Author, Terri Fields explores the possibilities in her latest novel of the same name, recently released by Sylvan Dell Publishing.  From beasts found in the water to those on the land and in the air, they all go head to head, but the one that takes home the trophy may surprise you!

When Fields' book first arrived in our house, my son was instantly drawn to the story thanks to the eye-popping cover.  As he initially flipped through the pages, he became transfixed with each of the amazing realistic pictures drawn by Laura Jacques.  And, when we read the story together, he became a all-around fan of The Most Dangerous.  The book disappeared into his room for many more reads before I finally got my hands back on it.  As a young boy, what more could he ask for in a book -- creepy, crawly, brutish beings competing against each other?!?

As a parent, I see much more than just a tale of real beasts of epic proportions.  I see facts shared in interesting ways.  I see critical thinking skills being demonstrated.  And, I see a multitude of ways to learn beyond the book through the activities found both at the end of the story and online, keeping the kids coming back for more both inside and outside the pages.  What more could a parent ask for?!?

In case you missed it, check out Fields' guest post earlier this week, complete with an additional fun activity supplemental to the story and great for everyone's imagination!

Special thanks to Sylvan Dell Publishing for a review copy of The Most Dangerous by Terri Fields.

What beast do you believe would win the title of most dangerous?  Why?
Posted by Tif Sweeney at 6:33 PM