At the end of June, in the scorching heat, I ventured to one of my local bookstores for another night with John Lutz.  I first met Lutz last year with the release of Serial and had another opportunity to see him again for the release of Pulse.  This time around, however, I was able to snag a little exclusive interview after the event that I found to be the best part of the entire night.  I encourage you to click on over to the Walrus site to read all about it! 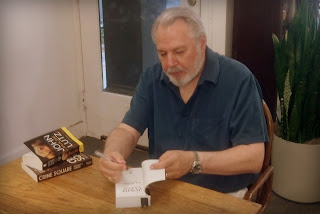 For those not familiar with Lutz, he is an author of thrillers, often featuring serial killers.  His most well-known work is probably Single White Female, a book that was eventually created into a Hollywood film starring Bridget Fonda and Jennifer Jason Leigh.
Posted by Tif Sweeney at 7:26 PM