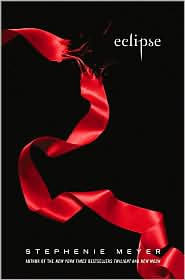 I have FINALLY finished this series! Though I completely drank up these books, I still feel that I could not finish them fast enough! I absolutely love this series!! Eclipse has left many people with mixed emotions, and am definitely fitting into this category! Now, done to the detailed opinion . . .
**WARNING: SPOILER ALERT**
I had so many mixed emotions throughout this book. Edward was really having to make up for the lost time and leaving Bella in New Moon. Jacob, who was there for Bella in her greatest time of need, was pushed to the back burner. Bella was stuck in an unknown love triangle (at least unknown to her until the end!). And, I just kept thinking to myself . . . Edward and Jacob both have the same goal. Can't they just put aside their differences for the time being to help save Bella? I was so glad when they finally decided to join forces, though I will say that it took them long enough! However, I will say that the ending really bothered me. I knew that Bella would choose Edward. Afterall, was there ever really a choice? But, what about Jacob? I actually really liked his character and pity him for his loss . . . not only of the woman he loved, but also of his best friend. Then, I begin to think . . . does Bella really know what she is giving up choosing the path of a vampire. After her conversation with Rosalie, I think she does. However, will she regret her decision in the long run? Especially considering that she saw what her life would have been if she had chosen Jacob? With Jacob, she could lead a normal human life, stay in contact with Renee' and Charlie, and have children. With Edward, children are out of the question unless they have adoptive children like Carlisle and Esme . . . but still, they are sooooo young and will always be still teenagers. And, what is with Bella not wanting to marry Edward? Okay, I actually can see her point in one sense . . . she had always grown up with a negative view of marriage because it didn't work out for her parents. But still . . . she was willing to pledge eternity to Edward, but not marry him? Marriage seems inconsequential to me when you look at it in the sense of immortality. Overall, though, I still keep going back to Jacob. I think that he is such a good guy in this story and has only received the bad end of the deal in every sense. He was the rightful leader of his pack, but chose to be the "Beta" instead. He fell in love with Bella, protected her in so many different ways, and he is left behind for her to join one of his mortal enemies. Will this love keep him from EVER imprinting or finding another love? Bella was able to find two true loves, why can't Jake? I just pity him because he truly is a good and loving man. Nice guys should not have to finish last! Though, I will throw a prediction out there . . . I really think that there is going to be some way that a truce will be wrought among these enemies. I think that the charm bracelet with gifts from both sides will play a part. I think that Bella has a special gift of some sort that will help in the truce once she is bitten (you know that it is bound to happen!). At the very least, Jacob will never be forgotten. The wolf and the man are all too much a part of her and the charm will never let her forget that. Well, enough rambling . . .
I cannot wait for the fourth book, Breaking Dawn, to come out. It is tentatively scheduled to be released in Fall 2008. Let's hope it is no later! I can't wait to find out more! Also, the author is currently working on another book on the side -- an alternate version to Twilight, but from Edward's perspective -- titled Midnight Sun. For a glimpse of the book and to read the first chapter of this side project, click here. It's a very different, but intriguing perspective from what we all know. I've been wondering since the start of these books what it would be like to get inside Edward's head!
There are some also great frequently asked questions and additional information on her website. Check it out when you get the chance!
Posted by Tif Sweeney at 8:04 AM