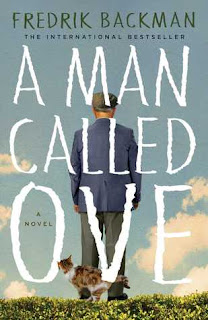 Ove is a grumpy, cranky old man.  Nobody seems to be able to follow the rules.  Everybody seems to be making choices that Ove doesn't agree with.  He sees things in all black and white, and he just does not have the time and patience to add the color.

However, one day a family moves in next door and changes everything, beginning with running over his mailbox.  Ove becomes challenged in his ways.  His routines are destroyed, and people become attached, whether Ove wants the attachment or not.

I had so many people recommend this book to me, so I decided to give it a try.  In fact, I chose this book for the first read of Book Bloggers International 12 Months, 12 Readalongs project (#12mos12rals).  I posted weekly discussion questions and encouraged others to join in the conversation.  (Discussions linked here:  Week 1, Week 2, Week 3, Week 4.)

At first, I found the book difficult.  Ove was so negative, which resulted in the negative feelings being transferred to myself.  It just gave me a crabby feeling about the book and I found myself not wanting to pick it up.  In addition, I was not expecting so many triggers related to suicide.  It was this that I wish I had known more about before opening this book, to be better prepared before experiencing the topic so deeply multiple times.

Then, something changed.  I reached a point in the book where I found myself wanting to pick up the book and even having a difficult time putting the book down.  I found myself understanding, appreciating, and eventually, loving Ove.  I never expected that to happen, or the tears I shed at the end before the closing of the story.  I never expected to end up adoring the story that started out so frustrating and boring to me.  I think A Man Called Ove just proved that feelings can change, especially once we take the time to understand . . . understand where someone comes from  . . . understand what someone has experienced . . . understand why someone might believe in one thing or another.

I leave you with one of my many favorite quotes from the book:


"You only need one ray of light to chase all the shadows away."

A Man Called Ove is a ray of light.

Have you met Ove?  What did you think of his tale?
Posted by Tif Sweeney at 8:00 AM

Email ThisBlogThis!Share to TwitterShare to FacebookShare to Pinterest
Labels: 2017 Reviews, B Authors, Fiction