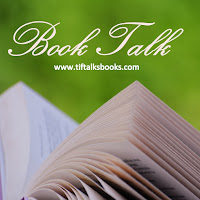 Life has proven to be very chaotic, and posting here on the blog (or the lack thereof) is proof of that; however, I anticipate a change coming soon to aid in calming this chaos.  And, I have plans for when that change comes.  I won't say big plans because I may start with small steps, but I will take the small steps!

The TOP POST for the month was my to-do list and announcement post for the Winter 2016 Mini Bloggiesta, both in hits and comments.  On the other hand, I do believe that one post needs MORE LOVE . . . my #OneWord for 2016.  I posted it a bit later than planned, but it is the one that I have put some of the most thought into.

The TOP PIC for the month was my (overly ambitious) January TBR pile.  I thought it would be fun to share the stack I will be reading from for the month, and I hope to continue with the habit for the rest of the year (as you will see in the picture below). 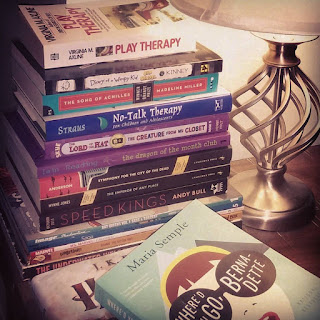 My BOOKS READ for the month is a short list, but they were pretty good reads to kick off the year.  Here's the full list . . .

Choosing a FAVORITE READ for the month is hard because two of the books stand out.  If I have to choose only one, I would go with The Girl With All the Gifts, but The Song of Achilles would be a very close second.

Last, but not least, I will leave you with my reading plans for February.  This is the stack of books that I will be pulling from this month.  Some of them are books for my class, some are review books (that I'm very behind on!), and then I have my stack of comics and graphic novels that I hope to fit in for a bit of Comics February.  Here's to a great month of reading! 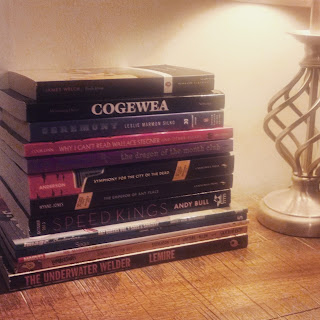 How was your reading and blogging in January?  What do you have planned for February?
Posted by Tif Sweeney at 10:34 PM