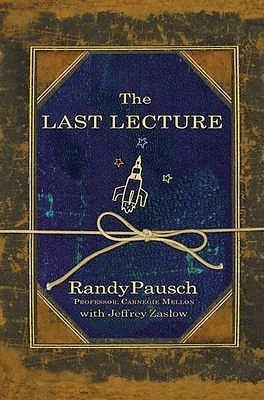 Across the country, professors are selected to give special lectures at colleges and universities.  These lectures are not their typical lectures, the ones they give every day.  Instead, those selected are given the same topic:  What would you say to your students if it were your last lecture ever given?  Randy Pausch was one of these professors selected to give this lecture at Carnegie Mellon.  When he was selected, he had no idea that it was going to literally be his final lecture.  He was diagnosed with terminal pancreatic cancer and given only months to live.  Even despite his diagnosis, he chose to continue with his speech and The Last Lecture was born of Pausch's final words of wisdom.

I knew the topic of this book before listening to it, and so I braced myself for sadness - lots of sadness.  What I did not expect was humor and genuine warmth.  And, I experienced all of it in extremes because I was listening to Pausch himself narrating his own story.  His stories, his words, his wisdom impacted me and will stay with me, probably more so than if I had been simply reading the book.  In fact, it is one that I will likely revisit on a regular basis . . . tears and all.  Next time, I will stick with the print version.  I know that there will be many quotes that I will be taking note of the next time around.

Have you been affected by The Last Lecture?  Did you find it as powerful as I did?
Posted by Tif Sweeney at 8:00 AM