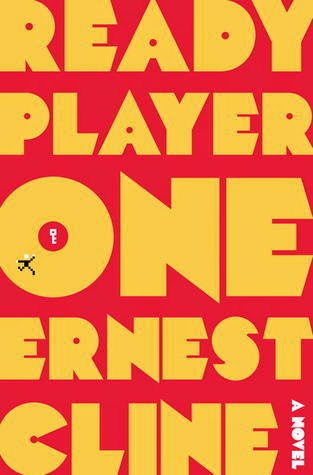 Ready Player One is one book that I have heard much chatter about.  When I saw that it had become available last October on audio through Overdrive, I decided to give it a try.  After multiple expirations and sitting on the wait list to have access to it again, I can finally say that I completed this audio after five months!

Cline's novel takes us into a dystopian world that has people living more online than in real life.  Video gamers find themselves excelling, and the possibility of attending school without the stress of real human interaction is very appealing.  People can choose to live their lives completely through the computer without ever leaving home.  The ultimate motivator for complete immersion in this online world comes from one of its creators, leaving a hidden game and secret treasure announced upon his death.  Wade Watts is one of these teens that has completely succumbed to the alternate world, attending high school online and searching for the treasure in his spare time.  He takes us (the readers) on quite the adventure that feels so real.

I am personally not a gamer, so initially went into this book with some hesitation.  I quickly realized this story was so much more.  Yes, there are many gaming references and I likely did not catch or understand all of them.  However, there were many references to the 80's that I adored, flooding me with memories and inspiring me to get my hands on some of my old favorite movies and music.  Cline also gives us laugh out loud humor, which gave me lots of interesting looks as I listened while on the track at the rec center!  Not only that, Ready Player One is filled with action, exceptional character development, a little cyber love, and a LOT of fun.  I am actually quite sad that I could not live in this story any longer than the five months it took me to finish it.

I cannot close without commenting on the narrator, Wil Wheaton.  At first, I enjoyed his narration, but as the story progressed, I came to love him.  The irony that he was a child of the 80's himself and that he may have even been referred to in the story only adds to his significance and impact for my love for this book.

The Conclusion:  I loved it!  Forget the book though because this one is a MUST on audio.  Ready Player One will likely make my favorites of the year!

Have you adored Ready Player One as much as I have?  What music and/or movies did it make you want to seek out?
Posted by Tif Sweeney at 1:00 PM