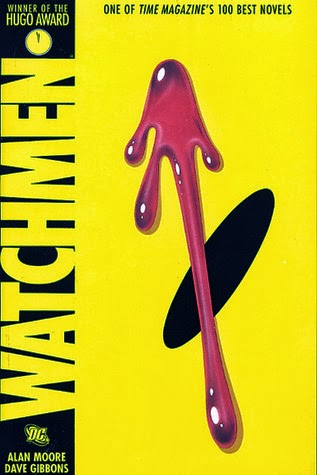 When you think of superheroes, you think of flawless men and women who fight for justice and the good of the world.  Alan Moore debunks this stereotype in Watchmen by following the fall of the superhero.  Someone is stalking and killing the good guys.  The human flaws are becoming unraveled in the heroes.  With such a spiral, what will happen to the world?

Watchmen is a comic that took me by surprise.  It was my first superhero comic I have read, but I am not unfamiliar with the genre because they tend to be my favorites on film.  I'm used to seeing superheroes save the world and Moore brings us something on a different level completely.  He delved into the psyche of each hero, creating a dark world in an already dark universe.  The story was so complex that I think some of the details flew past me.  In the end, I was left not sure of what I thought of the story.  One thing I was sure of was that I respected Moore for Watchmen.  He broke superhero boundaries and left me pondering the good vs. evil in a new way.

How did Watchmen affect you?  Is this one you recommend re-reading for a greater understanding?
Posted by Tif Sweeney at 7:00 AM