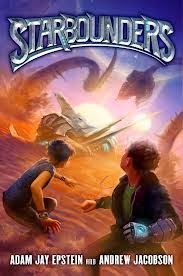 Zachary Night is the son of Starbounders, an elite and highly classified group of trained individuals who protect the galaxy. His older brother has already proven that he is capable to wear the Night shoes, but now it is Zachary’s turn as he heads off to Indigo 8, the training center for future Starbounders. Will he be able to prove that he is a worthy Night and future Starbounder himself? Or, will he prove to be a kid that attracts just too much trouble?

Epstein and Jacobson are the authors of The Familiars, a series that features the magical pets of wizards. In their debut, they venture into the world of fantasy, filled with magical animals that become the most unlikeliest of friends. In Starbounders, they take a turn into the realm of science fiction, traveling through space with the hints of battles seen in Star Trek and meeting monsters like you would see in Star Wars. Their title character, Zachary Night, is one that harnesses the struggles that all teens face: acceptance by their friends and a chance to prove themselves. And, he meets the unlikeliest of friends along the way as well.

Night befriends an exchange student from another planet and a gutsy girl that can give him a run for his money both in and out of the classroom. As they struggle to fit in, yet excel in their studies, they find themselves getting in trouble along the way … but it is not the kind of trouble that your typical teen may experience. The three students find themselves in need of trying to save Earth.

Epstein and Jacobson have a knack for developing characters that a reader can relate to. They also bring in wit and humor, action and suspense, and overall, a story that you cannot turn the pages fast enough to find out what happens next. Starbounders was an exciting read, one that I cannot wait to share with my son. I look forward to the adventures Epstein and Jacobson will bring us next in the galaxy that they have created.

I have had the pleasure of hosting Esptein and Jacobson as guest authors here at Tif Talks Books before! I recommend that you check out The Familiars Takes Us On A Tour and Talking Heroes with Adam Jay Epstein and Andrew Jacobson to get an inside view of the minds behind The Familiars and Starbounders.

Thank you to Rachel at Regal Literary for a review copy of this book!

Have you had the opportunity to travel with the Starbounders? What did you think?
Posted by Tif Sweeney at 7:00 AM