As I was going through all my notes, I discovered that I had forgotten to share one of my favorite events of 2012 so far . . . a night with Lauren Oliver, author of the book Delirium.  I read this book last year and really enjoyed it on multiple levels.  Since she was touring for the sequel, Pandemonium, I knew I had to attend! 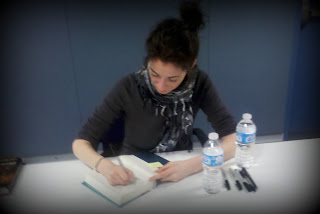 Oliver remembers her writing began with writing companions to her most beloved books or as she better words it, "a 7-year-old version of fan fiction."  She was surrounded by writing thanks to her dad (her inspiration!) who also just so happens to be an author, but of nonfiction books featuring murder and serial killers.  However, the most amazing bit of information that Oliver shared about her writing journey was how she wrote her debut novel Before I Fall . . . on the subway, on her blackberry, emailing chapters to herself!  Isn't that amazing?!?

I really could go on and on about this event, but instead I will leave you with just a few fascinating tidbits instead from Oliver as a reader and writer . . .

Have you had the pleasure of reading one of Oliver's books or attending one of her events?  What did you think?

P.S.  I was recently perusing Lauren Oliver's website and the design is gorgeous!  If you are interested in getting lost, definitely check it out!