Guest Article: Ink in Our Veins by Nathan Everett

I am so excited to announce a guest today . . . Nathan Everett, author of the newly released The Gutenberg Rubric, sharing some information that is the heart and soul of books . . . the ink!  I had the pleasure of meeting and working with Nathan as a sponsor this last spring during Armchair BEA and would feel lucky if I were able to meet him in person.  Without further ado, I introduce you to . . .
------------------------------
Ink in Our Veins 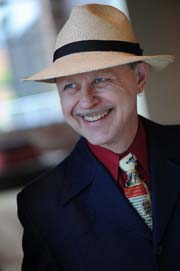 The closest I came to actually being a printer was the hours I spent in the school office or church office running the mimeograph machine. My mother was a secretary and I remember as early as 8 or 10 years old that my job was to stand beside the mimeograph as she turned the crank and insert sheets of scrap paper between the freshly inked sheets that came out of the rollers. Failure to do so would result in a messy ink transfer between the pages. We would get into a rhythm, and before long the 100 or 200 copies would be stacked neatly and I would remove the slip-sheets as my mother re-inked the drum and fastened the next stencil in place. Even the next morning, when the usher handed us our bulletins, I could smell the ink on the page and know that I had helped print it.
I’m not sure that counts as being a printer’s devil, but eventually my experience elevated me to the position of “master mimeographer” at the high school where I printed everything from the newsletter to the playbook for the football team.
I learned early on that not all ink was the same. The thick globs that I spread on the mimeo drum with a spatula were a far cry from the sticky ball-point pen ink than leaked and soiled more than one of my shirts. And the discovery of the silky liquid India ink for my first fountain pen (that also leaked) was nothing short of awesome.
So I suppose that it was natural that when I started a novel in which a rare book expert needed to authenticate a manuscript, the first thing I thought of was the ink. And, in fact, it turns out that is one of the first things that an anthropologist is also interested in. But I had no idea what an incredible history ink had in our world—a history that goes back 4,000 years. I encountered the book Forty Centuries of Ink by David Nunes Carvalho in digital format, of all things, as a part of the University of Virginia Library Electronic Text Center when I was doing research. Published in 1904, the book traces the development of ink from the earliest known examples, through recipes, ritual usage, poison pens, and tattoos. It is a remarkable read, if a little overwhelming at times.
But the science of authenticating manuscripts and incunabula (works of 15th century printers) had always depended upon actually scraping a bit of ink from the parchment and mixing it with various chemicals that would reveal its composition. For some reason, that’s frowned upon. Imagine scraping a bit of ink from the pages of the Gutenberg Bible to find out Gutenberg’s formula for ink. Various records and traditions had shown that the principle ingredients Gutenberg used were boiled linseed oil and lampblack, similar to artists’ oil paint. It was certainly not going to be acceptable to scrape ink off the page of every ancient manuscript that came to light or, more destructive yet, to cut a bit of the paper and dissolve it in chemicals to do carbon dating.
Then a remarkable thing occurred in 1986: a refurbished cyclotron at the , , was used to analyze the inks on a page from a Gutenberg Bible without destroying or adversely affecting the rare work. The results showed that in addition to the oil and carbon, the ink contained nickel, copper, and lead. In further studies, it was shown that Gutenberg’s inks had an unusually high proportion of copper and lead compared to other printings of the era. Other findings from the study showed that even the master printer had difficulty maintaining a consistent impression as the thickness of the ink was three times greater on the recto (odd) page than the verso (even) page.
As I continued to research the dating of manuscripts, I discovered similar experiments involving x-ray spectrography that enabled the work to be done with portable equipment rather than having to take the manuscript to a cyclotron.
To my knowledge, no one has compiled a master data base of ink-prints from ancient manuscripts and incunabula as I have suggested that the Dr. Keith Drucker created in The Gutenberg Rubric, though it seems like a good idea to me. During the first 50 years of printing, it was more common for printers to mix their own inks than to buy from a commercial vendor, so differences from shop to shop should be ascertainable.  For Keith Drucker and Madeline Zayne, verifying the date and ownership of various documents played a critical part in deciphering the hidden code. 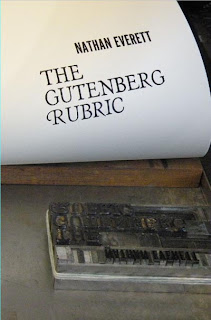