Harry Potter and the Order of the Phoenix by J.K. Rowling

Today we take a look at Harry Potter and the Order of the Phoenix by J.K. Rowling in honor of the release of the final movie in the series.  It is now less than two days until the release and as each day goes by, I get a little (or maybe a lot!) more excited!!  I'm still working on if I will be able to go to the movie or not, but I will definitely be keeping you posted!

The Order of the Phoenix is a book that holds a special place in my heart.  It is not because of the book itself exactly, but more so the memory of purchasing it instead.  When the fifth book in the series was released, I attended  my first ever midnight release party!  I bought my book and took it home to start reading it.  I only made it a little ways into the story before heading to bed for the night, but just the idea of being able to buy the book at midnight was so fascinating and fun!  And, I loved how so many others were also in attendance.  At this time, the parties were not as huge as they would become.  The trend was still just beginning and who knew that it would be continuing today!!

As I think about this memory, I realize how pivotal the Harry Potter series has been over the past ten years.  It has taken authors to the same level as rock stars.  It has inspired those reluctant to pick up a book and read.  It has propelled the book business to offer midnight release parties and cause even more excitement around a great piece of literature.  And, of course, Harry Potter is simply a fun read with easy-to-relate characters!

I really do not have more to say on this book, except that though it was not my favorite (probably due to the ending once again!), it is one that has also grown on me.  It contains a number of very small, but very important details.  And, it is one that I am currently listening via the mesmerizing voice of Jim Dale as I take my walks.  It is one that I can get lost in easily, but it is also okay if I do not focus 100% of my attention on the entire time.

Instead of sharing a list of favorite quotes for this one, I am going to do something a bit different due to the length of the pieces that I wanted to share with you.  Instead, I am going to recommend that you open up your own personal copy (and if you don't have one, get one!) and read the passages on page 244 and page 317.  In each of these pages lie what some may view as a defiant Harry, unable to hold his tongue.  I view Harry as a brave soul, one that is standing up for what he believes in despite the consequences that may result from his actions.  Harry is a boy that is constantly wondering why he is the center of all this attention, but I believe that in this book he truly begins to stand up and be the legend that began with the rumors of "The Boy Who Lived."  No more whining.  No more haphazard spells that he may tend to luck out on.  He begins his journey to being THE Harry Potter!

Last, but not least, the daily recipe . . . Cauldron Cakes!! 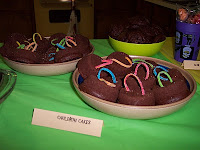 Directions
Bake the Devil's Food Cake into cupcakes following the instructions on the box, except do NOT use the liners.  Simply grease up the cups using cooking spray or butter.  Once they have cooled off, slice the top off of the cupcake, so that it can sit evenly when turned upside down (hence, the cauldron shape!).  Poke the licorice (or designated "handles") so that it looks like handles on a cauldron.  Voila!

Tomorrow we visit Harry Potter and the Half-Blood Prince and I share the first of a yummy duo!
Posted by Tif Sweeney at 10:04 PM