Harry Potter and the Goblet of Fire by J.K. Rowling

Today we visit the fourth installment of the ever-popular Harry Potter series by J.K. Rowling ... Harry Potter and the Goblet of Fire.  I remember reading this book so many years ago for the first time.  I gobbled the book up, unable to finish it quickly enough soon after its release.  I loved the idea of the Triwizard Tournament.  I loved the challenges of the Triwizard Tournament.  I loved that other wizarding schools were introduced and the diversity among them became a part of the story.  However, the ending of this book ruined it for me!  It was absolutely devastating ... more so than any of the previous books, and I think it was simply that a "good guy" had to die and I felt that the "bad guy" triumphed.  As I have re-read the books multiple times over the years, I have grown to appreciate this book more.  Afterall, the "return" was truly inevitable ... it was bound to happen sooner rather than later!  As the book began to grow on me, I started appreciating the importance of this book in the series as a whole.  In fact, on this latest re-read, I closed the book with more satisfaction than I ever have before.  After the multitude of re-reads (I really have lost track!), I have come to realize how much thought and planning Rowling put into this series.  And, I have come to realize that I fall more in love with the series each and every time I pick up these books.  I understand the intricacies better and better.  My familiarity with the characters only strengthens my relationship with the books.  And, I have come to realize that I cannot even begin to predict how many more times I will be returning to these books in the years to come.  Even those that I have considered weaker than others have so much to offer!

Keeping in tradition, I will leave you with a few of my favorite quotes from Harry Potter and the Goblet of Fire . . .


"If you want to know what a man's like, take a good look at how he treats his inferiors, not his equals."  spoken by Sirius Black, p. 525

"You fail to recognize that it matters not what someone is born, but what they grow to be!"  spoken by Dumbledore, p. 708


"A week ago, Harry would have said finding a partner for a dance would be a cinch compared to taking on a Hungarian Horntail.  But now that he had done the latter, and was facing the prospect of asking a girl to the ball, he thought he'd rather have another round with the dragon."  p. 388

(How many other times do you think boys have thought just these thoughts, only not quite with such a comparison?!?)

And, last but not least, let's get to another yummy recipe . . . Cockroach Clusters! 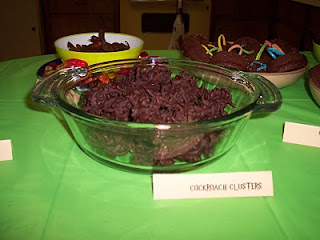 Directions
Melt the chocolate until smooth.  You can do this on the stove top, but I use the microwave, heating in 15-30 second intervals.  Stir in noodles until the mixture is thick enough to hold together.  Spoon bite-sized clusters onto wax paper and let harden in the refrigerator.  These can be frozen (just thaw before serving).

See you tomorrow for a look at Harry Potter and the Order of the Phoenix and a recipe for Cauldron Cakes!
Posted by Tif Sweeney at 8:41 PM