Harry Potter and the Deathly Hallows by J.K. Rowling

Today we come to the final installment of my countdown and my reviews of the Harry Potter series with Harry Potter and the Deathly Hallows.  After the first part of this movie was released, I decided to go back and re-read the entire series, and particularly re-read Deathly Hallows for the very first time.  I was so excited to visit this book again and I must say that I fell in love with it even more the second time around!  Who knew that on the second reading that I would still tear up at all the appropriate places (and some maybe not so appropriate!)?!?  Who knew that I would not be able to set the book down until I finished the very last page in the wee, wee hours of the morning?!?  Who knew that when I did set the book down that I would have the special feeling in my gut . . . that feeling that left me sad that this was the end, but completely satisfied with where the end left off?!?  I had no idea that all of this would happen with such strong feelings, emotionally and physically, on a re-read.  And, I firmly believe that it speaks louder than words at the power of Rowling's work!

Some of my favorite pieces of Deathly Hallows included, but were not limited to . . .

For fans who followed this series until the end, so much pressure was put on the ending of this phenomenal series.  Rowling lived up to the hype and then some.  We lost characters we loved, we triumphed over evil right alongside the wizards, and we left feeling the impact of those seven years even after nineteen years later.
In the previous six reviews and remembrances of the Harry Potter series, I left you with a number of my favorite quotes from each installment.  Unfortunately, this time, I've got nothing.  This is not because there is nothing worth sharing.  It is simply because my eyes were not in the mode for catching them.  My eyes were too busy gobbling up the story as quickly as possible.  However, I will leave you with a bit of fun . . . my original review of this book almost four years ago.  And, of course, I will also leave you with a final yummy recipe that is only complete with the Celestial Tortilla Chips that I posted about yesterday!  Enjoy!
Crystal Cheese Ball
Ingredients
2-1/2 cups shredded Monterey Jack cheese (about 10 ounces)
2 packages (3 ounces each) Cream Cheese, softened and divided
1/3 cup finely chopped onion
1/4 cup Mayonnaise1 teaspoon Chili Powder
1/3 cup chopped pitted ripe Olives
1 to 2 tablespoons Milk
1 large red Bell Pepper (decorations)
6 whole pitted ripe Black Olives (decorations)
A batch of Celestial Crackers 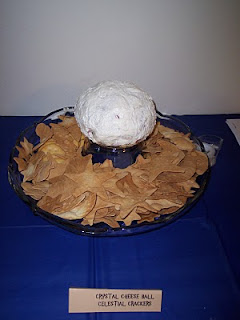 As you can see, I didn't decorate the outside of my crystal ball. I thought that this was super cute, but I ran out of red peppers! Personally, I would buy 2 large red bell peppers so you have enough for both the decorations and the ball itself!
I was very much inspired by the original post of this recipe found over at HarryPotterBirthday.com.
Posted by Tif Sweeney at 9:16 PM