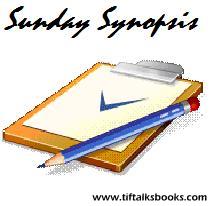 It's been a while since I really checked in and I have a lot to share with you!!!  The last couple of weeks have been a whirlwind, but sooooo much fun!

Let's first start with a couple of posts that I have shared around the blogosphere!  If you have not already taken a gander at these and are interested in learning more about Tif of Tif Talks Books, I highly recommend it.

I also thought I would give a quick summary of the latest posts here as well since I have not done that in a couple of weeks.  I have had a number of great guest posts and I highly recommend that you check them out!!
Phew!!  That's a lot of synopsis-ing!!! Now, let's get to the real fun stuff . . . my trip to San Francisco!!  I am limiting the number of pictures that I took, but if you are interested in seeing more, just let me know!  I can always do another post later this week with more pics if you so desire!! 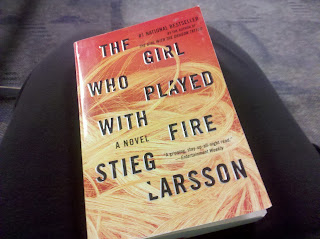 I flew out on a Friday evening and lucky me, got delayed for a few hours in Milwaukee!  I got some great reading time in though with The Girl Who Played With Fire by Stieg Larsson!
I ended up getting in to San Francisco really late, had a meeting most of Saturday, but then my most anticipated part of the trip came . . . A night tour of Alcatraz!!!!! 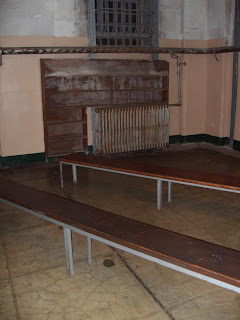 Here is the library at Alcatraz!  It really only had three of the bookshelves like the one pictured above.  It was so neat to see and one of my favorite parts of the tour!  My first favorite . . . the isolation cells!!!  Don't ask me why I'm so morbid!!  :) 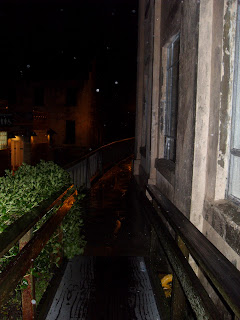 The night we toured the prison and the area, it was dark, dreary, and raining . . . perfect to set the mood!!!  Here is a picture of a walkway outside of the Warden's Chambers.  Doesn't it just look daunting?!? 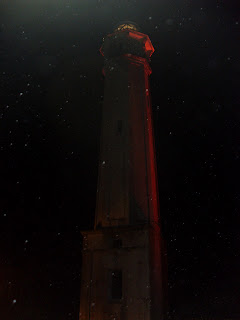 Another picture of Alcatraz . . . this time the lighthouse that is on the island.  You can see the rain in the picture and I just love it, even if it is a tad dark!
I then had a large number of meetings and presentations, only getting to see bits and pieces of the city until Tuesday.  Tuesday afternoon, I took a city tour on a double-decker bus and then hit the trolleys and the streets to do a bit of exploring on my own with some friends. 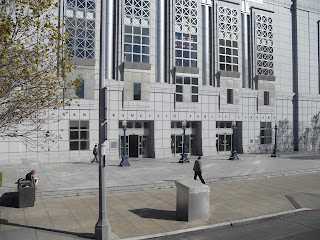 On the tour, we passed the San Francisco Public Library.  I just loved the look of this building and only wish that I could have stopped to see the inside! 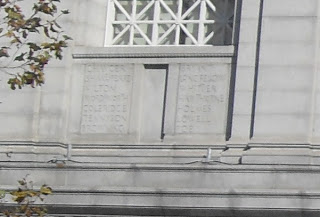 The old library is actually an Asian Heritage Museum today, but you can tell determine its origins by looking at the names carved into the stone.  You may have to click on this one to enlarge it.  Do any of my fellow readers recognize a few names?  Can you guess who's name intrigued me enough to take a picture of this group of names? 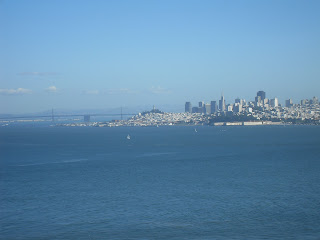 How can I not post a picture of the city skyline?!?  Isn't it just beautiful?!? 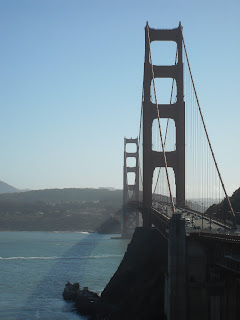 And, of course, the Golden Gate Bridge! 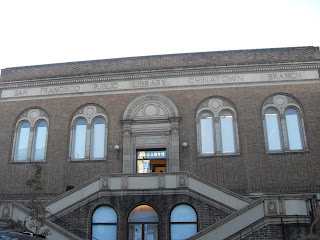 After the tour, I rode a trolley and we passed the Chinatown Branch of the Public Library.  I am really wishing that I had walked into this one, too! 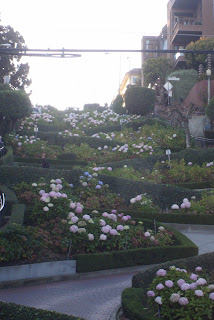 One of my biggest accomplishments of the trip . . . walking Lombard Street, or the Crookedest Street in the World!  Let me tell you . . . this baby is steep!!!  And, I walked at least three blocks of steepness before this! I was sore after this trip!!! 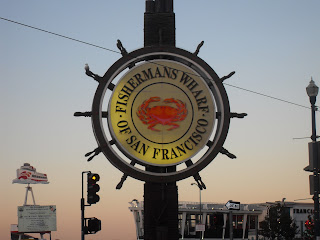 I could not leave the city without visiting the wharf!! 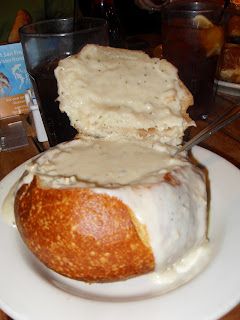 And, of course, having a good bowl of clam chowder!!  What a way to end a great trip!!! 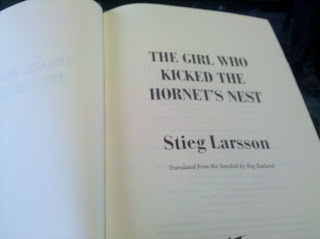 As I was delayed in San Francisco on my way home, I got a bit more reading in with The Girl Who Kicked The Hornet's Nest by Stieg Larsson.  I was hoping to get more read, but alas . . . I was having fun!!
Now, I am going to leave you with another freaky picture in honor of Halloween!!  I don't post pictures of myself too often, but my freaky face in Alcatraz prison was just so weird and macabre that I could not pass up the chance!! 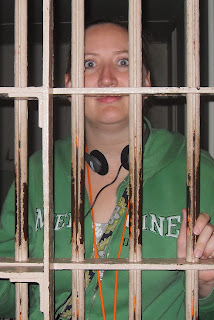 Now, I will leave you with one big apology!!  I hope that you do not have nightmares tonight featuring the freak above!!
Sweet dreams!!!!
Posted by Tif Sweeney at 8:31 PM