Let us give a warm welcome to Carrie of West Virginia Red Reads.  She is here to share a bit of Gorey with us . . . Edward Gorey that is!  Are you familiar who this is and how he fits into the season of scary and spooky?  Read on to find out!!

------------------------------
When one is asked to contribute to a book blog in October, there is only one obvious subject choice, Edward Gorey. Thanks to Tif I have the opportunity to spread the word about the man who was obviously integral in shaping Tim Burton.

While best known as an illustrator, classics such as The Gashlycrumb Tinies: or, After the Outing and The Iron Tonic: Or, A Winter Afternoon in Lonely Valley show that Mr Gorey is also an accomplished writer. Baleful, dire, foreboding, menacing, portentous, sinister, and threatening, Gorey’s work stands out in the Victorian and Edwardian influenced genre.

Mr Gorey who published under a number of pen names such as Ogdred Weary, Dogear Wryde, and Ms Regera Dowdy, is also known for his animated introduction to Public Broadcasting System's Mystery! and also his designs for Broadway's 1977 Dracula. Often Mr Gorey is relegated to the world of adult reading and many of the books that he illustrated are indeed meant for adults, books like Dicken's Bleak House and Kierkegaard's Fear and Trembling/The Sickness Unto Death to name a few. However, it is his work in children's and juvenile fiction which draws my attention. Mr Gorey said most of his material was aimed at "reasonably small children," whom he did not believe were scared by the sinister subject matter.

One of our favorite books that he illustrated was Edward Lear's The Jumbies. Mr Lear, perhaps best known for his poem "The Owl and The Pussycat," was famous for the limerick form as well as verbal invention. A favorite verse from The Jumbies reads: 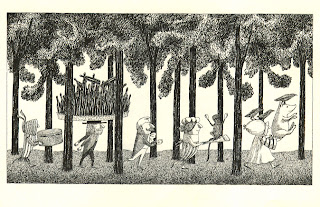 And they brought a Pig, and some green Jack-daws,
And a lovely monkey with lollipop paws,
And forty bottles of Ring-Bo-Ree, And no End of Stilton Cheese.

Additionally, he is well known for his work on John Bellairs and Brad Strickland’s books. Belliars' first young adult novel The House With a Clock in its Walls, was a supernatural thriller starring the Lewis Barnavelt, Uncle Jonathan Barnavelt, and their neighbor Florence Zimmermann. There were 2 sequels, The Figure in the Shadows and The Letter, the Witch, and the Ring. Bellairs wrote nine books, including ones which focused on fan-favorite Johnny Dixon and Professor Roderick Childermass as well as Anthony Monday and Miss Myra Eells who fought supernatural battles against wizards and warlocks in The Dark Secret of Weatherend and The Lamp from the Warlock's Tomb. After Bellairs' death Brad Strickland completed the unfinished works of Bellairs as well as going on to write using these characters.

One of my favorite couplets is: 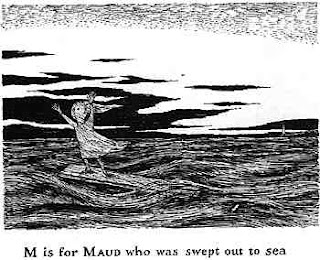 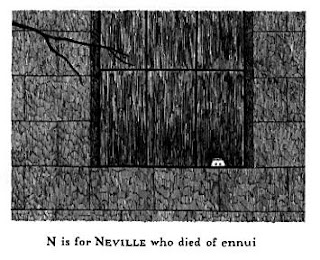 This is the classic children's learning book which belongs in any dark and dreary library.

Cautionary Tales for Children by Hilaire Belloc and Edward Gorey:  One of Hilaire Belloc's most famous works, "Cautionary Tales for Children" satirizes a genre of admonitory children's literature popular in England in the late 18th and 19th centuries. The seven stories contained in this work are macabre parodies of childhood lessons, and will entertain more sophisticated readers who can appreciate these tales of disproportionate punishment. Presented in a classic picture book style, illustrators have captured the foibles of children like Jim, who let go of his nurse's hand and was eaten by a lion; Matilda, who told lies, and was burned to death; and Henry King who swallowed string. The consequences range from naughty children being whimsically eaten by lions, to stern reprimands for a boy who fires a loaded gun at his sister. Originally written nearly a century ago, Belloc's sprightly verses are a quick and cathartic read for teenagers, and reflect a trend of literature that is still popular today. (1)

The Doubtful Guest by Edward Gorey:  An unexpected guest appears one night and perplexes the family with its strange habits. (2)

The Twelve Terrors of Christmas by John Updike and Edward Gorey:  Edward Gorey's off-kilter depictions of Yuletide mayhem and John Updike's wryly jaundiced text examine a dozen Christmas traditions with a decidedly wheezy ho-ho-ho. This long out-of-print classic is the perfect stocking-stuffer for any bah humbug. (3)

Amphigorey Again by Edward Gorey:  This latest collection displays in glorious abundance the offbeat characters and droll humor of Edward Gorey. Figbash is acrobatic, topiaries are tragic, hippopotami are admonitory, and galoshes are remorseful in this celebration of a unique talent that never fails to delight, amuse, and confound readers.  Amphigorey Again contains previously uncollected work and two unpublished stories-"The Izzard Book," a quirky riff on the letter Z, and "La Malle Saignante," a bilingual homage to early French silent serial movies.  Rough sketches and unfinished panels show an ironic and singular mind at work and serve as a fitting celebration of Edward Gorey's unusual genius. (1) 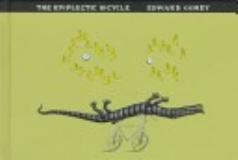 The Other Statue by Edward Gorey:  The annual charity fete at Backwater Hall in Mortshire is disrupted by the mysterious death of Lord Wherewithal and the theft of the Lisping Elbow.  Confusion and misgivings abound. And, alas, the Earl of Thump's stuffed thisby is found disemboweled by the edge of the lake. Dr. Belgravius and his nephew, Luke Touchpaper, attempt to tie the loose ends together and wonder why Miss Underfold was seen wearing a hat decorated with black lilies. And why was Victoria Scone dancing the tango with Horace Gollop in The Soiled Dove? (1)

The Gilded Bat by Edward Gorey:  With his typically dark, droll humor, Edward Gorey presents the transformation of Maudie Splaytoe, a girl prone to staring at dead birds, into Mirella Splatova, a chic and mysterious prima ballerina. This woeful tale chronicles an ascent to the peak of fame, followed by an unexpected and dreadful demise. Gorey's exquisitely crafted illustrations of magical ballets, elegant drawing rooms, and stark apartments set the stage for this melodrama starring a slightly peculiar heroine. (1)