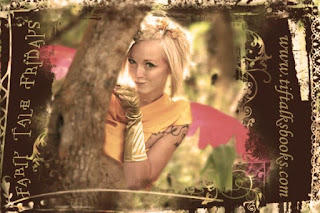 Special Thanks to my Personal Faery Friend for the Button Art: Ye Olde Faery Shoppe
This week's selection for Fairy Tale Fridays is The Bremen-Town Musicians by The Brothers Grimm.  This tale was a nice little change in the usual routine.  No kings and queens.  No princesses or violent endings.  Just some talking animals looking to survive and live their final days in happiness and content.

The story begins with a donkey running away to be a town-musician.  Along the way, he comes across a hound, a cat, and a rooster.  Upon their journey as they stop for the night, they come across a home filled with robbers basking in their stolen abundance.  The animals develop a plan to get rid of the robbers and settle in to their new home.  When one of the men comes back to take back their territory, a scene ensues and he runs back to his friends never to return.  According to him, their opponents were not worth the fight after a scene like this . . .


"Ah, there is a horrible witch sitting in the house, who spat on me and scratched my face with her long claws; and by the door stands a man with a knife, who stabbed me in the leg; and in the yard there lies a black monster, who beat me with a wooden club; and above, upon the roof, sits the judge, who called out, 'Bring the rogue here to me!'

I do have to question the intelligence of these robbers and I am also just left pondering what the last sentence brings to the story because it just confuses me!


And the mouth of him who last told this story is still warm.

Despite the last line, I actually enjoyed this one and am left wondering if there is a modern version of this tale out there somewhere.  It definitely has some potential for one!

What are your thoughts on tales with talking animals?