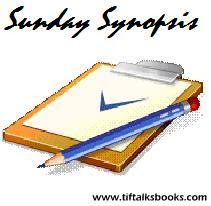 SPECIAL ANNOUNCEMENT:  This will be my FINAL weekly Sunday Synopsis post!  I will be moving to a monthly wrap-up of some sort, but will not be doing it at the beginning or end of the month!  I will probably do it around the middle somewhere, so be watching for this new change.  I just felt that there is so little change from week to week these days, that more can be accomplished during the time that I write these.  I am not sure if I will be continuing with this same format, but it will probably be pretty close.
I also have not yet posted my monthly features:  Literary Locals and Reading Challenge Check-in.  These are coming later this week!  In case you did not hear, I had a bit of a fall last weekend that really had me accomplishing little!!  I am feeling better, but still have my painful days.  I'm hoping these will get few and far between over the next couple of weeks!
So, enjoy my shortened final weekly synopsis and see you back here later this week for some more book-ish talk!!
DISCUSSIONS:
CURRENTLY READING:
BOOKS RECEIVED:

HOPE YOU HAD A HAPPY EASTER!!
Posted by Tif Sweeney at 9:00 PM