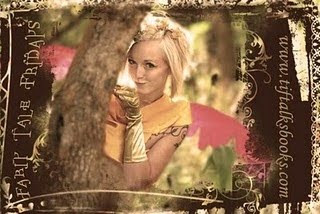 Special Thanks to my Personal Faery Friend for the Button Art: Ye Olde Faery Shoppe
This week's selection for Fairy Tale Fridays was One-Eye, Two-Eyes, and Three-Eyes by The Brothers Grimm.  I'm going to try something a little different this week in summarizing this tale, so bear with me as I list the important points of this story . . .


3 sisters
1 Eye:  Oldest
2 Eyes:  Middle Child
3 Eyes:  Youngest
1 Hateful Mother
1 Wise Woman
1 Special Goat
Middle child with 2 eyes is the outcast because she looks the same as everyone else.
The mother and sisters treat the middle child poorly, leaving only the scraps for her to eat and making her do all the work.
The wise woman helps the middle child and the goat provides her with whatever she needs, both in life and in death.
Based on this very brief synopsis, it brings me to see quite a few similarities between this tale and one we read in the past . . . Cinderella.  One daughter is the outcast, but of course she has a little help from nature to assist in a happy ending!  However, there are quite a bit of differences this time around in One-Eye, Two-Eyes, and Three-Eyes.

In this tale, the one child who looks like the majority is the one that is singled out.  It is the one that is the middle child that receives the harsh punishments and cruel treatments.  Two-eyes also just happens to be this mother's biological child.  And, last but not least, the heroine in this story forgives and forgets in the end.  In many of the tales that I have read, these are completely opposite of the "norm."  Typically, the one who is different is the one that is the outcast.  The extremes, meaning the youngest and the oldest, are usually the ones that are targeted or featured in the tales.  Cruel treatment is usually a result of mixed families (e.g., step-children and -mothers).  And, something terrible happens to those who do the punishing, and we do not hear anything about them again.

Of all these differences, the one that I keep returning to over and over again is that Two-Eyes takes in her sisters at the end of the story.  She completely forgives and forgets.  As the last sentence in my version states,


"Two-eyes however, made them welcome, and was kind to them, and took care of them, so that they both with all their hearts repented the evil that they had done their sister in youth."

This is what I like to think is the true happy ending!  Despite the poor choices made, despite the harm that was done, kindness and love is stronger than evil and will always win out in the end.  Granted, the story is a bit on the odd side, but I truly like this one!  For some reason, I always have!

What did you think of this week's tale?  Did you come up with a different moral?