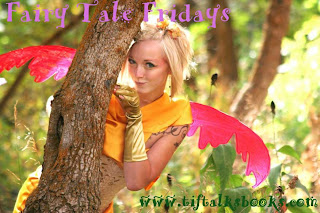 Special Thanks to my Personal Faery Friend for the Button Art: Ye Olde Faery Shoppe
This week for Fairy Tale Fridays, we are visiting a favorite of many, Cinderella.  There are a multitude of versions out there of this title, so I decided to read a couple of them this week.  The first is The Brothers Grimm version.  This version is much bloodier and violent than I ever remember reading from childhood.  It makes me wonder if I have actually ever read the original!  I would think that eyes being pecked out and toes being cut off would be pretty hard to forget!!  On the other hand . . .

The second is a beautiful adaptation (and much more kid-friendly!) that I came across at my local library . . . Glass Slipper, Gold Sandal:  A Worldwide Cinderella by Paul Fleischman and illustrated by Julie Paschkis.  As the subtitle indicates, this is Cinderella's story from a multitude of ethnic viewpoints, from Mexico to Ireland to Japan and everything in between.  From country to country, the story varies.  Instead of a fairy godmother found in Grimm's version, we find a crocodile who brings forth "a sarong made of gold" (Indonesia), or "a cloak sewn of king-fisher feathers" (China), or "a kimono red as sunset" (Japan).  The pictures are beautifully illustrated, weaving the many versions into one modern tale that I would like to one day personally own for my own children.
There are many modern day Cinderella stories today.  One of my favorite authors, Gregory Maguire wrote The Confessions of an Ugly Stepsister and Ella Enchanted written by Gail Carson Levine was adapted into a movie starring Anne Hathaway.  What is your favorite re-telling or adaptation?
Due to a personal request from a loyal participant, I have decided to post a few weeks worth of what will be coming next.  (Thanks for the suggestion Carol!)  It will better help those of you participating and may just help me in staying a little more organized!
Friday, March 12th:  In honor of Share-A-Story, Shape-A-Future, share your personal favorite fairy tale from childhood.
Friday, March 19th:  Rapunzel by The Brothers Grimm
Friday, March 26th:  The Ugly Duckling by Hans Christian Anderson
Friday, April 2nd:  The Goose with the Golden Eggs by Aesop
Posted by Tif Sweeney at 9:21 PM