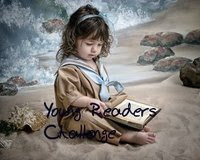 It appears that I have completed another challenge!!! Yeah!!!

And, my list of books with associated links are below: