Wait Until Twilight by Sang Pak 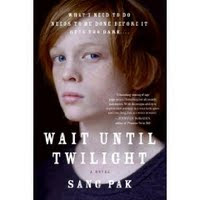 Pak's first novel, Wait Until Twilight, is accurately portrayed on the cover description . . . "A hauntingly strange and powerfully affecting debut novel that heralds the arrival of a unique and captivating literary voice."
Haunting? Yes.
Strange? Definitely.
Powerful? Absolutely!
Pak's novel is simply bizarre . . . but not in a negative way! Pak and his character Samuel had me so enthralled that I did not want to put the book down and I could not stay away long when I did! I cannot even tell you why! Maybe it was the accuracy of the teen character? Maybe it was the darkness that can face each of us at some point in time in our lives? Maybe it was because it made me think about what kind of person I am and want to be? I can only speculate because I truly do not think it is any of these . . . but yet it IS all of them at the same time. Wait Until Twilight is a book that will stay with you long after you read that final word.
For those of you who want to be captivated, here's a teaser from the cover . . .
Not long after his own mother's death, sixteen-year-old Samuel discovers a set of deformed triplets hidden behind closed doors in his sleepy Georgia community. The babies -- whose shut-in mother believes they were immaculately conceived and whose menacing brother is a constant threat -- take control of Samuel's every waking and sleeping thought. His only escape, he realizes, will be to save the monster children. But to do so, he must rein in his darkest impulses as he undergoes a profound transformation from motherless boy to self-defined man -- because sometimes the most terrible monsters are those that live inside us all.
Want more opinions on this title?
Missy's Book Nook
Posted by Tif Sweeney at 9:21 PM