Do you remember back in the days of high school where you read the typical mainstream literature for your English courses? Titles such as To Kill a Mockingbird, The Grapes of Wrath, Frankenstein, and multiple Shakespeare tragedies come to my mind. During this time, I often read a lot of brain candy on my own, including such authors as Stephen King and Mary Higgins Clark. This was truly my extent of my personal library. Therefore, when I went off to college and signed up for English courses, both composition and literature, I expected to read the same basic literature that I read in high school. Boy, was I wrong!!


My first English course was a composition course and the most shocking read was Equus by Peter Shaffer. This play completely blew me out of the water. I was so shocked that first of all, this was considered good enough to teach, but also to teach to first-year students! For those that are not familiar with this story, I will not go into details here! To be honest, it is still a very disturbing story to me! For more information on the play synopsis as well as in recent news featuring Daniel Radcliffe (known to many as Harry Potter!), click here.


Moving on . . . in a later semester, I decided to take another English course, but this time in the literature realm. When I signed up for this course, I was expecting to read many of the same things that I read in high school. Many of my friends who had already taken the course confirmed these suspicions. However, when I went to buy my books, I was shocked! I was not buying the books I thought I would be. The titles were not your usual classics. No Tolstoy. No Shakespeare. No author that I even actually recognized! Instead, the titles ranged from The Things They Carried by Tim O'Brien to Push by Sapphire to Housekeeping by Marilynne Robinson. I must have signed up for the one class with an instructor that had a very non-traditional class and selection of books! I was very nervous for the course, but I stuck with it! And, I ended up loving the course! It opened up so many avenues for me in the aspect of literature and beyond. I discovered new authors, new styles, and new ways to dig into a book. In fact, I would even say that this class was life-changing because of this selection of books! 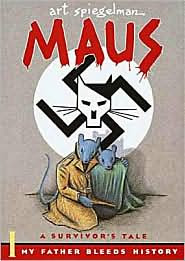 One of these books (or series of books in this case) that has affected me so much is Maus by Art Spiegelman. It was my very first exposure to graphic novels, which many believe to be long comic books. This is sooooo not the case! Graphic novels add an element to a story that is absolutely unparalleled. You can actually visualize the story how the author wants you to visualize it and the pictures oftentimes can speak more than the words. They are absolutely amazing and I encourage those of you out there who have never picked up a graphic novel to do so! They are AMAZING!


Maus I & II is truly the author's story. It is about his relationship with his father, a Holocaust survivor. You are not only getting the story about the father-son relations, but you are also getting the story of survival of the father during this tragic time. Symbolism is so strong 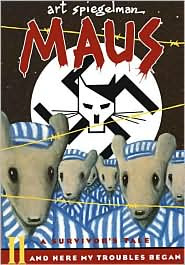 throughout this book . . . the Germans are depicted as cats, the Jewish as mice. It is not Tom & Jerry. It is something so much more powerful than that, that I honestly cannot put the strength of this book into words. To see the pictures, to read the story . . . it all had such an effect on me. You get a different feeling about the Holocaust that other books don't give you. This is truly one of the most powerful books that I have ever read!

As I think back on these college courses, I sometimes wonder why I didn't take more literature courses. I absolutely loved being in these classes that expanded my view of the world and my library collection! I wish I would have, but I can say that I'm okay that I didn't. These two courses in particular broadened my mind enough to go out and search for quality literature (and not necessarily mainstream!) on my own. Thank you to whomever my instructor was! I am just sorry that I don't remember your name! :)
Posted by Tif Sweeney at 8:01 AM