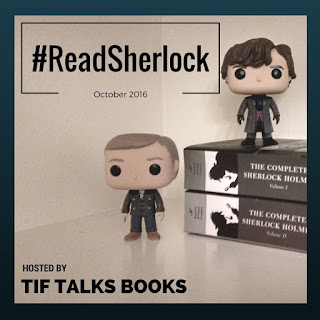 Welcome to the first full week of Operation #ReadSherlock!  At the beginning of every week, I will be posting a quick reminder of what we are chatting about this week with a few of my own thoughts attached, and then I encourage you to share via the comments or linking up to posts on your own sites.  Along with each reminder, I will do a quick wrap-up of what has happened since the previous weekly wrap-up.  Essentially, the weekly posts will be the hub for the event, with a few highlights of items that may interest you throughout the week.  Without further ado, let's kick off the first week . . .

ICYMI:  I kicked off the month with a quick fandom vote, highlighting a few of the Sherlock favorites.  If you haven't already cast your vote, be sure to do so here.  I realized after the vote began that I probably should have voted for our favorite Dr. Watson, but I totally missed that one!

The INSTAGRAM SCAVENGER HUNT for this week is Scarlet/Red.  Be sure to share all your scarlet/red pics and tag them with a #ReadSherlock hashtag.  I may highlight a few of my favorites in next week's post!

Now, for the fun stuff . . . the discussions!  Let's start with A STUDY IN SCARLET!  This is the perfect story to begin with because it is the first appearance of the infamous Sherlock Holmes.  I originally read this story only a few years ago, and will be picking it up this week to read again.  As I read, I will be sharing my thoughts on social media (particularly Twitter) using the hashtag #ReadSherlock.

It seems only logical to move straight into the BBC's SHERLOCK SEASON ONE because the first episode of the series is adapted from A STUDY IN SCARLET, and features Benedict Cumberbatch as Sherlock Holmes and Martin Freeman as Dr. John Watson.  The series premiered in 2010, and I had the pleasure of discovering it a couple of years later.  The two main actors originally were not large names, but have since been propelled into the spotlight; Cumberbatch appearing in blockbuster hits as THE HOBBIT, STAR TREK INTO DARKNESS, and the upcoming DOCTOR STRANGE and Freeman appearing in THE HOBBIT and the TV series, FARGO.  The series comes to a cliff-hanger ending with a stand-off between the two partners and the villainous Moriarty.

I immediately fell in love with this show because I felt it had it all:  action, mystery, humor, and of course, the chemistry between two amazing actors that are pleasant on the eyes.  It was a show that both my husband and I could sit down and enjoy, not just once but multiple times.  Of course, I was going to move onto the second season!

In BBC's SHERLOCK SEASON TWO, we get to find out what happens in that cliff-hanger among the three men.  We are taken on a roller coaster ride that happens to include our selection for next week, THE HOUND OF THE BASKERVILLES.  It's an eerie episode that is definitely fitting for the spooky season of October, and moved directly into one of my personal favorites of the entire series thus far . . . the season finale chronicling the end of Moriarty and as viewers speculated, Holmes himself.

For those that may have missed it, there is also a mini episode that premiered between the second and third seasons as a Christmas episode.  It's a short one, and you can check it out right here:

I personally did not see this one until recently, and I'm not sure what took me so long to find it.  It's rather an amusing short!

What is on your Sherlock mind this week?