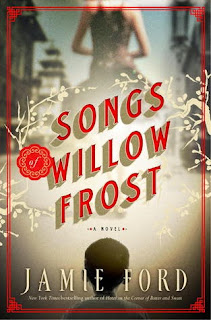 I have heard rave reviews of Jamie Ford's debut novel, Hotel on the Corner of Bitter and Sweet, but have yet to read it.  I came across his most recent novel, Songs of Willow Frost in my Overdrive audiobook library and decided to give him a try.  Afterall, he is an author based in Montana!

At the tender age of seven, William Eng was placed in the Sacred Heart Orphanage in Seattle after his mother was found lifeless in the small apartment they called home.  For five years, the orphanage is where he called home with only a couple of kids he could call friends.  During those five years, he believed his mother to be dead, but on one afternoon during an outing, he spotted a beautiful actress that he believed to be his long-lost mother.  He set out to find this woman, determined to learn what happened five years ago.

Songs of Willow Frost proved to be a beautifully tragic story.  I grew to love Ford's characters, the good and the flawed.  I easily got swept into his worlds, both in the 1920's version as well as into the Great Depression years with his vivid imagery of words.  I found myself wanting to walk beside William on his journey of discovery -- the path that led his mother to leave him to an orphanage when it seemed she loved him so much.  It proved to be an emotional path, for both characters and readers, and when the last words were spoken, I found myself a bit sad to be done with William's story.  I really could have continued with him longer.

Ryan Gesell narrated Ford's story, and I was pleased to have him read to me.  His voice made it easy for me to quickly fall back into the story, bringing it to life around me.

Since I was so impressed with this story by Ford, it seems only necessary that I get my hands (or ears) on his debut novel now.

Have you read either of Ford's novels?  What did you think, keeping in mind that I have only read his second?
Posted by Tif Sweeney at 8:00 AM