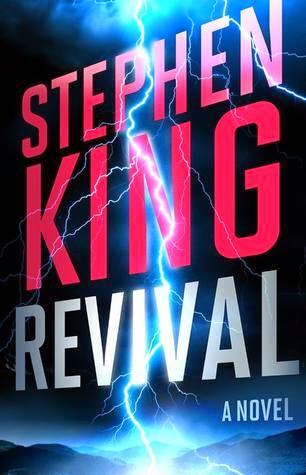 If you are a regular reader of Tif Talks Books, you know I am a long-time fan of Stephen King.  When I heard that Revival was going to be released and that it was King going back to his horror roots, I knew I had to get my hands on the book.

In Revival, we meet a young Jamie and his reverend, Charles Jacobs.  An unlikely friendship forms between the two, but due to a horrible tragedy the two are separated.  Years later, we meet back up with Jamie, but he is not the same.  He has grown into a man that struggles with addictions, unable to hold a job.  After losing yet another gig, he stumbles upon his old friend Charles, discovering that he was not the only one experiencing some rocky years.

Revival was not what I was expecting.  I think that King very likely found this one scary to write because of his battles with addiction, but I did not find this one horrific like some of his past stories.  What that said, I also must note that I didn't NOT like the book.  I enjoyed the story.  I still believe that King is one of the best in the business, particularly when it comes to character development.  I just believe that my expectations and my reality were not on the same playing field with this one.  More simply, I went in wanting to taste the sweetness of an apple, but got the acidity of an orange.  And, for the record, I like both apples and oranges.

Have you read Revival yet?  What did you think?  Have you ever began reading a book with a set of expectations and discovered that your expectations were off?
Posted by Tif Sweeney at 8:00 AM