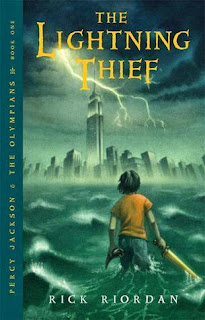 For my frequent readers, you know that we moved AGAIN this last summer.  That meant I was in the car with my kids for three days.  The kids do not have electronics, so that translates to me having to get creative in keeping the kids entertained while on the road.  And, of course, my first thought was to get an audiobook to help pass the time.  The choice was really no contest.  I had to give Percy Jackson a try!

The Lightning Thief is the first of Rick Riordan's series, Percy Jackson and the Olympians.  We get to meet Percy and his good friend, Grover.  We are there when Percy discovers that his father is the god of the sea, Poseidon.  We stand back and observe while he is accused of theft by Zeus himself and finds himself fighting creatures he only read about , yet never believed existed.  And, we fall in love with this kid prone to all sorts of trouble!

The Lightning Thief was fun, adventurous, and left us all laughing.  My son requested that we listen more and more, and we were sad when the story came to an end.  Of course, we went out and bought the next book in the series to fill that void!

On another note, we also watched the movie after we were settled into our new home.  Though some parts are similar, many things were also changed.  All of us were a bit disappointed, but still enjoyed the movie overall.  It was just another case of the book being better!

Have you had the pleasure of meeting Percy Jackson?  What was your favorite part of the story?
Posted by Tif Sweeney at 8:00 AM