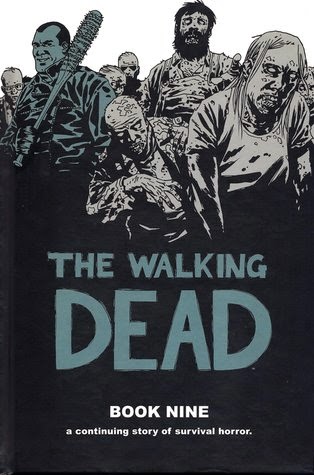 It has been a while since I picked up The Walking Dead.  Before moving, I tried to catch up on some of the paperback volumes.  After settling in, however, I thought it was best to go back to the hardcover editions.  With this route, I could refresh my memory with what I have already read as well as to get some updates on the story.  It was just what I needed to fall back into this story.

In Book Nine, a LOT is happening.  We meet new friends, new alliances, and new evils.  Relationships develop and grow.  Characters, particularly young Carl, mature.  And, we experience devastating losses, and stand by as loyalties are formed and challenged.

When the series began, we see survivors of a zombie apocalypse, fighting to survive the undead.  As the series progresses, the survivors are facing not only the evil of the undead, but also of the living.  I find the path that Kirkman writes fascinating - his views on the human race, both the good and the bad.  It leaves me pondering if the bad are more likely to survive because of their ruthlessness.  Yet, it gives me hope to know that the good still stand fighting despite the adversity faced.  Who knew zombies could result in such deep thoughts?!

All in all, I keep reading.  I have become so attached to the characters that I cannot abandon them now.

Are you a fan of The Walking Dead, either onscreen or on the page?  What does this story leave you pondering?
Posted by Tif Sweeney at 8:00 AM