The Eyes of the Dragon by Stephen King (Audiobook Review) 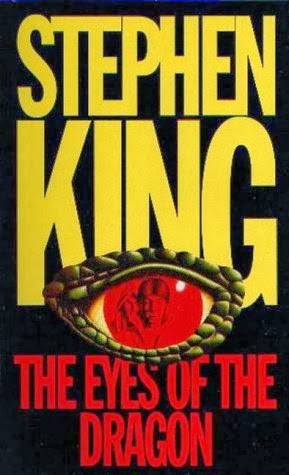 King is known for his work in horror, but he writes so much more than the scare.  One example is The Eyes of the Dragon, a novel that I would classify as a fantasy filled with knights, kings, wizards, and as the title suggests, a dragon.

In this novel, we meet King Roland, a man that rules his lands passively.  He's liked well enough, but he does not make major or drastic moves in any direction.  This is just how his advisor, Flagg enjoys it.  However, as Roland's sons (Peter and Thomas) become older, Flagg discovers that he needs to make his evil move sooner rather than later.  The eldest boy, Peter is showing too much promise as the up-and-coming heir to the throne.  Flagg must act carefully, yet quickly to get young Peter out of the way of his long-term plans and move young influential Thomas into the role he requires.

I had first read The Eyes of the Dragon decades ago.  I enjoyed it and it stuck with me because it was so different from any other King novel I had previously read.  The second time around, I listened to the audio version of this story (read by Bronson Pinchot).  This time, I appreciated King's novel even more.  It was a very well thought out story, much more complex than I remember it being on the first read.  The characters were my favorite of the novel, which is no surprise because of my usual love for King's talent for character development.  Peter is a brave and determined young man; Thomas, a confused, yet genuine soul.  Roland does not leave me with a strong positive or negative reaction, though he is one I do pity for a variety of reasons.  Flagg is the ultimate man of evil.

King steps away from his trademark with this novel and it is one I highly recommend, for fans and for those that hesitate at the simple mention of King's name.  I would not consider it a high fantasy read, but rather one with fantastical hints.  All in all, it was a read to escape in.

I cannot close this review without mentioning the narrator.  When I say narrator, this actually has a double meaning.  First, the story is told to us by an unknown narrator (at least, I believe him to be unknown).  With this in mind, we then move on to the audio narrator, Bronson Pinchot.  He speaks to us as the first mentioned narrator and makes me believe he is the true narrator of the story.  I must say I prefer this story in audio format.  It is just fitting for the layers of narration.


FOR KING FANS ONLY!
WARNING:  SPOILERS MAY BE PRESENT!

This is where I must make a confession.  When this book ended, my mind was blown apart by an epiphany.  Roland and Flagg are the same name of characters in The Dark Tower series.  I believe Flagg to be one and the same man.  I suspect that Roland of The Dark Tower is a descendant to Peter or Thomas, though I sway towards the latter based upon the ending of The Eyes of the Dragon.  Some initial research online indicates The Eyes of the Dragon to be a prelude to The Dark Tower series.  It has been years since I read all of Roland's adventures in The Dark Tower series.  Can anyone more familiar or up-to-date share opinions on this connection?  I know that many of King's novels are connected, but I am particularly intrigued by the relations between these two in particular!

Have you seen through the eyes of the dragon?  What other genre-bending books of King do you enjoy?
Posted by Tif Sweeney at 7:00 AM