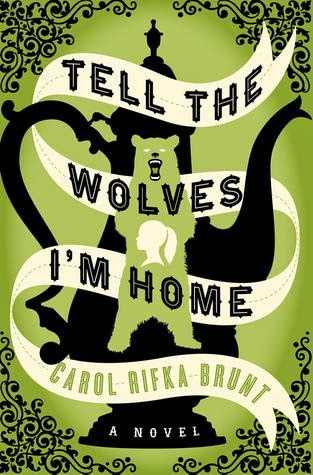 Tell the Wolves I'm Home is Carol Rifka Brunt's debut novel, and she doesn't cut any corners with this one.  She dives into the 1980's, chronicling the life of fourteen-year-old Junie as she struggles to comprehend that her uncle has the mysterious killer disease AIDS.  When he passes, a stranger comes into her life - a man that may just be the answer to true healing in all aspects of her life.

Junie struggles to understand the battle that her uncle - her best friend - is fighting.  She tries to interpret the anger her sister is feeling.  But, the ultimate obstacle is sorting through the details she discovers after her uncle loses his battle.  Brunt's novel takes us on a roller coaster ride of emotions as we discover everything alongside Junie, a girl already strife with her own struggles as a young teen that doesn't quite fit in.

Tell the Wolves I'm Home is not an easy read.  It's one that will fill you with a LOT of mixed emotions.  It is a story that should be accompanied by a box of tissue, both for the tears of sadness as well as the swelling of your heart in joy.  If you were around in the 80s, you may also find yourself reminiscing in the cultural references, sending you down memory lane of your own past.  In the end, I appreciated Brunt's debut.  She has brought us a complicated story, but a story that needs to be told.  It had its awkward moments, moments that you would rather forget, but it is a piece of art that you will be left pondering for a long time.

Have you read Tell the Wolves I'm Home?  What did you think?  Do you particularly have any thoughts on the title and why it was chosen?
Posted by Tif Sweeney at 7:00 AM

Email ThisBlogThis!Share to TwitterShare to FacebookShare to Pinterest
Labels: 2013 Reviews, B Authors, Fiction