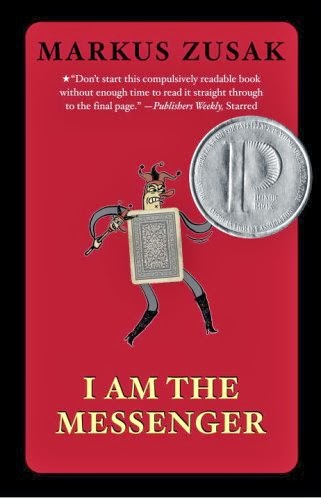 Ed Kennedy is a bum.  He lied about his age to get a job as a cab driver.  He is in love with his best friend, despite the impossibility of them ever hooking up.  He spends his time playing cards with his friends or drinking coffee with his horribly stinky dog he calls the Doorman.  All this changes when the sarcastic Ed Kennedy brings a bank robbery to a halt with an unexpected bout of heroism.  That's when the playing cards with hidden messages begin arriving in the mail, sending Ed on a very unanticipated journey.

I began listening to I Am The Messenger on audio.  Unfortunately, I was unable to renew the book and ended up finishing the last half of the book as an ebook on my phone - my first ebook because I HAD to finish this book.  Through to the end of the story, I still could hear the voice of Mark Aden Gray.  He was the voice of Ed, providing a rich personality to the character that Zusak created.

Ed Kennedy is one of those special characters that will stay with you for a long time.  He's brutally honest and genuinely raw.  He throws all his flaws out on the table, and I could not help but completely adore him.  Zusak created a wonderful, wonderful story with Ed as the centerpiece.  And, the last two sentences cemented I Am The Messenger as another one of my favorite books of the year.

Have you been introduced to Ed Kennedy yet?  Were you as impressed as I was with Zusak's story?
Posted by Tif Sweeney at 7:00 AM