Charleen (Cheap Thrills) and I are back to talk more about The Shining!!! 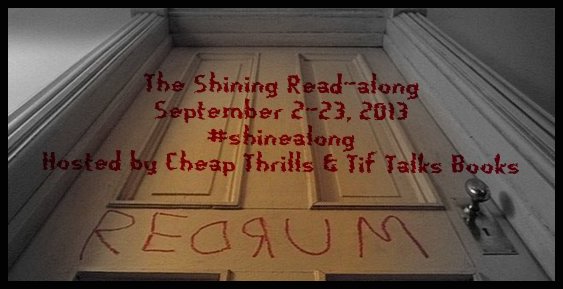 Before we begin, let's do a quick re-cap of the #shinealong posts thus far . . .

This brings us to Check-in #2, covering Chapters 17-33.  Though we learn a bit more about the characters, particularly Jack's childhood, it is within these chapters that we really begin to see some action and tension begin to build.  Like the chaos that is beginning to build among the Torrance family, my mind is filled with chaotic thoughts about these latest chapters.  Bare with me as I get a few of these thoughts down here for you (in a bit of a chaotic manner) . . .

Last week, we really talked about King's brilliant character development.  We covered our thoughts on Jack, Wendy, and Danny, but I feel like we missed a key player in the story:  The Overlook Hotel.  When I read Chrisbookarama's check-in post earlier, I realized that she hit it right on the nose . . . "The Overlook is introduced as a character.  Its malevolence is only hinted at."  Just as we learn about the Torrance past, we also learn about the daunting, and sometimes, horrific history and secrets of the hotel itself.  I don't think we can ignore the hotel as yet another key player in this story!

I mentioned last week, that I do not remember the intense amount of foreshadowing throughout the story during my first read.  I also am realizing on this re-read that I missed out on a lot of the symbolism.  The wasps' nest that was introduced in last week's section is a key example, but the one that was hinted at more in this section was the boiler.  The boiler is really a symbol of Jack himself.

The boiler had a pressure gauge:  old, cracked, clotted with grease, but still workable, Jack had none. (page 282)

Both Jack and the boiler really need to be put in check on a regular basis or it/he will explode!  Jack has been trying to maintain his personal pressure gauge, but it is becoming more difficult to do.  And, Wendy and Danny are beginning to notice the cracks developing (re-appearing?).

I really cannot avoid mentioning Danny.  This poor child, too mature for his young age, is feeling the pressure.  The pressure from what haunts The Overlook.  The pressure of constantly trying to please his father, hoping to avoid those previous dark days and the visions that Tony is sharing with him.  The pressure of his parent's troubled marriage.  The poor child cannot even sleep peacefully without rustling in his sleep while his parents argue.  BUT, he also is such a strong young man to face the horrors that he has been warned about (ex:  Room 217).  On this re-read, I am viewing Danny in a much more emotional way.

I am going to stop here for this week and send you off to Charleen's blog for her thoughts!  Click on over and hear her thoughts on the latest chapters.  Don't forget to leave a comment, link up a blog post, and continue to chatter on Twitter about all things #shinealong.  I am loving everyone's comments as we read together!

A quick reminder of the final timeline . . .

Doctor Sleep Read-along (#sleepalong) information will be posted this week!  Be watching for it!

Tell us your thoughts on Chapters 17-33.  Can you feel the tension rising as we progress through the story?  Any quotes or sections that stand out for you?