Today I would like to welcome not one guest, but two . . . Adam Jay Epstein and Andrew Jacobson, both of the upcoming book The Familiars!  I personally am so excited for the release of this book and cannot wait to get my hands on a copy!!  In the meantime, we have a little "illusion" to satisfy us . . . 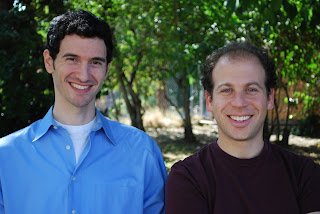 ADAM JAY EPSTEIN spent his childhood in Great Neck, New York, while ANDREW JACOBSON grew up in Milwaukee, Wisconsin, but the two met in a parking garage out in Los Angeles. They have been writing for film and television together ever since. The Familiars is their first book.


One day, Adam asked Andrew, “Are you familiar with what a familiar is?” And from that simple question, Vastia was born, a fantastical world filled with the authors’ shared love of animals and magic. They wrote every word, sentence, and page together, sitting opposite each other.


Adam Jay Epstein lives in Los Angeles with his wife, Jane, their daughters, Penny and Olive, and a black-and-white alley cat who hangs out in their backyard. Andrew Jacobson lives with his wife, Ashley, and their dog, Elvis, four traffic lights away.


THE FAMILIARS will be produced for film by Sam Raimi and Sony Animation. 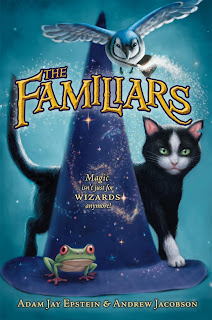 Here’s a story that sounds too good to be true. Two guys write five chapters of a book with a detailed proposal, get a book agent within a month, sell the uncompleted manuscript within two days of going out to publishers, and sell the movie rights the next week. Well, it’s sort of true, and sort of a big fat lie. Because what it doesn’t mention is the 10 years of rejection and frustration before it. We started writing screenplays when we met during college, and we spent years working day jobs and writing into the wee hours of the night at various LA coffee shops, sometimes so long that we were asked to leave. We endured break-ups and miniscule paychecks all in sacrifice of living our dream. Finding our first film manager – which is kind of like a stepping stone to a film agent -- took years. When we got our very first meeting with a manager, we both got all dressed up and drove over to the manager's office, circling outside as we were early… only to receive a phone call that the meeting had been canceled. We sulked away in our khakis and button downs. Hollywood success would have to wait another day. And it did. Even when success in film and television came, it only seldom felt truly rewarding. We were constantly faced with having to reinvent ourselves, and every job felt like a miracle (which it still does). Then, about two years ago, we decided to try our hand at being novelists. And we were fortunate in that we already had a film agent who worked in the book world to help us secure a literary agent in New York. Our “overnight success” in the book world doesn’t account for the 10+ years of struggle in the Hollywood trenches. It’s as much of an illusion as one cast by Skylar, the magical blue jay in “The Familiars.”