Guest Post: The Evolution of an Author by Anna L. Walls 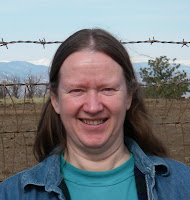 I would like to take the opportunity to introduce you to Anna L. Walls, author of King by Right of Blood and Might.  She gave me the opportunity to read her book a while back, and being the slacker that I am these days, I have not yet reviewed it!  I plan to post a complete review in the near future, but in the meantime, I would like to share this special post that Anna wrote specifically to share with the readers of Tif Talks Books.  Enjoy!!
EVOLUTION OF AN AUTHOR

be a published author in twenty years, I would have laughed in their

face. I never planned to be a writer, let alone a published author.

Twenty years ago, I was busy raising my kids and helping my husband

carve our life out of the wilderness here. Sure, I played with

writing a story a time or two over the years, forever ago; I still

have the typewriters – three of them, as a matter of fact – but mostly

it was more to see if I remembered how to type. They got put away

One day, roughly twelve years ago, we learned of a place in town

called Job Corp, the place offered free room and board, and our boys

could learn a trade. They could also learn to drive a vehicle. It’s

kind of hard to teach your kids how to drive if you don’t own a car.

At any rate, there were a whole lot of plusses involved in out boys

going. My oldest discovered the delights of computers and, being the

wheeler and dealer that he was, he did some trading and ended up with

a desktop computer and an old laptop. I have no idea what he traded;

in fact, I knew little of it until he came home and handed me this

little computer – my very first. Wow! Now, what do you do with a

computer? Did I remember how to type? It had a keyboard. I really

didn’t know what else to do with it. It was just a really cool,

glorified typewriter. Boy was I wrong.

I have always loved to read, but I prefer to read lying in bed. I’d

enough for a recliner, let alone a couch. Anyway, my husband doesn’t

like me to disappear for endless hours to read some book. He wants me

all of which were played on the TV. He didn’t care if I read why he

played, he just wanted me to stay at the table with him. Someone had

to get coffee, you know. And sometimes he’d ask me to watch his life

bar or figure out some puzzle. Blah. But now I had this nifty new

toy. I could play too. Let me tell you, my spelling and grammar was

horrendous at first, but with auto correct to fix my habits, there

had this ‘explain’ button, I learned some things about that too. I’d

Being a bit of a stickler about some things, I was curious about how

to judge how long a book was when typed on my sheet of computer paper.

I wanted to know what to aim for that I could call a ‘book’. I went

back to my room and picked up the last book I’d read. I don’t

remember rightly any more, but I think it was a little over 300 pages

long. Using my typing class lessons, I counted the ‘words’ across an

average page (five characters, including spaces, per word) and then I

counted the lines down. Back at my computer I adjusted the margins

until I got as close as I could, ending up with one inch margins all

around – close enough for me. Now I could aim for 300 some odd pages

and I’d have written a real book. Keep in mind I have never mentioned

publishing yet – it was a far away and unattainable concept.

During the course of writing KING BY RIGHT OF BLOOD AND MIGHT, I

learned many delightful things about writing and about my little

computer. I spend hours, days even, drawing maps and other pictures,

really bad in shades of gray. Because of all of that ‘playing’ and

‘learning’, my first book took two years to finish. After that, I

generated a story or two every winter, and every summer, I would read

through all that I had written, giving it all a loving tweak here and

there. Through it all, never still did I believe I would ever

publish; it was just the greatest pastime of all.

years ago now and I am thrilled at every sale, not because I’ll make a

dollar or two, but because someone I don’t know is reading something I

wrote, something I poured all my imagination into. It’s doubly

more have than I know, but they haven’t told me.

Since last April, I’ve had an internet connection for the first time.

Twitter, and I have made tons of virtual friends. I belong to several

great writing groups and writing sites, I follow dozens of blogs that

are chocked full of writing tips and publishing how-to information. I

improved because of it all. I may not be writing as much because of

all that, but I think I’ll be publishing more. My really cool hobby

passion and I couldn’t be happier. Maybe someday I’ll be able to

retire from my day job, but until then, I hope you all enjoy my books.

If you are interested in learning more about Anna, be sure to check out one of her sites: