Q & A With Shiraz The Author

Shiraz is the author of Defenders of the Scroll, a fantastical adventure reviewed by Tif Talks Books earlier this week. He has graciously answered a few questions for those of us with inquiring minds. Without further ado, let's give Shiraz a warm welcome!
-----------------------------
Tell us a little about your self and how your journey in writing began.
On one of the first creative writing pieces I did in grade school, we were told to use a line of Shakespeare (from a list of ten that we were given) to create a story. It could be the title, theme, a line in the story, anything. I used all ten as clues to a treasure. My teacher wrote the comment "Are you the next Agatha Christie?" I had to go ask my parent who Agatha Christie was. By the end of high school I was writing a novel that my friends were reading and getting really into, I wrote comic stories that I submitted to Marvel and DC (none of which got accepted), and I wrote a screenplay for a singer friend, but its hopes of becoming a movie died with his career. After that I just wrote for myself. I've always had the passion, but the rejections were too much, until DotS.
In Defenders of the Scroll, your characters are quite diverse, but you pull off a unity between them with grace. What or who inspired you for each? 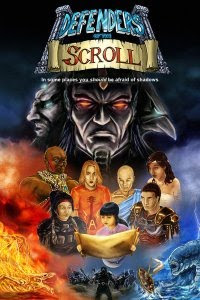 The main characters (The Hall, The Shadow Lord, Askar, Specter, Mornak, and The Defenders, except for Tenzin) were actually conceived by Rupinder Malhotra and Singh Khanna who came up with the original concept for DotS, which they want to make into a children's cartoon. I wrote the series bible for them, so I got to know the characters very well. They later asked me to write the novel and I created everyone else as the story unfolded, but I had no clue about any of them until they appeared on the page. I've never had one of my stories so completely write itself.

Who is your favorite character in DotS? Whom do you identify the most with?
I like Alex the most, but all my friends tell me that I wrote myself into the story as Tenzin. I disagree. There's a piece of my personality in each of the Defenders.

Can you tell us any news on when to expect more from DotS?
There will definitely be more books, but when is still a bit of a mystery. While DotS is out there, it's still just picking up steam, and while those who've read it are hounding me about book two, mostly because of how book one ends, I'd like book one to really get noticed first. Still, I'm sure the writing of book two will proceed full-on this year.

Do you have any other projects in the works (writing or otherwise) that you would like to share with us?
I have a novel that I started years ago that I'm doing a second draft on. I'm hesitant to release it soon because it's about vampires and the market's flooded right now.

Which book would you consider to be your all-time favorite? Why?
I really don't know. There are several I love right now, but there are a bunch I loved as a kid that I don't know if they'd hold up now. One of the most memorable was The Talisman by Stephen King. I read it when I was a teenager.

Who is your favorite author? Your favorite story by this author?
I have several but George R.R. Martin has impressed me most recently, and I love his song of Ice and Fire series because he has no issues killing off main characters at any time, so you're always at the edge of your seat.

What would be one piece of advice you would like to share with aspiring writers?
Keep writing and acknowledge criticism. I know it sucks when people don't like your stuff, but if several people complain about the same things in your story then it's probably something you should address. You're always going to be learning and improving your craft. The day you think you've got it and know just what to do without criticism is probably when your writing starts to go stale.
----------------------------

For more information on Defenders of the Scroll or Shiraz, be sure to check out the following:

Now, I'm going to put in a selfish plug here . . . Go buy the book!! Get DotS to pick up that steam!! I HAVE to know what happens next!!! Would you really leave me hanging?!?