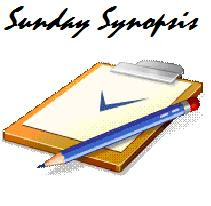 I am a little late in posting my little weekly summary. I had such high hopes of getting caught up this weekend, but then my internet went and died on me! Even now it is only working sporadically and to be quite honest, I am going crazy!!! Who would have thought that I would be so "plugged in"?!?! Thank heavens I have a 5-day weekend coming up, starting this Wednesday, to work on getting my internet working again consistently and caught up some more reviews!! In the meantime, here is my weekly synopsis . . .

AROUND THE BLOGOSPHERE: I still have not made it through my Google Reader, though I have finally begun to work on it. I'm hoping later this week to have a special post completely devoted to those amazing posts I want to highlight . . . say, over the past month!!!
ADDITIONAL UPDATES: I've received some awesome awards, will be signing up for some more challenges, and hope to particiapte in another read-a-thon in the weeks to come. There is a lot happening, and here's to hoping it all gets posted this week during my long weekend!!
Posted by Tif Sweeney at 9:02 PM