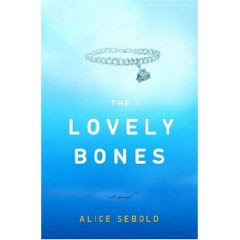 If you are at all familiar with the book world, you have probably at least heard of this book. It has been on national bestseller lists and has been talked about since it was first released in 2002. For those that have not heard of it or are not sure what the book is about, the first two sentences pretty much wrap it all up . . .


My name was Salmon, like the fish; first name, Susie. I was fourteen when I was murdered on December 6, 1973.
It was these first two sentences that hooked me in right away! This book was so intriguing, viewing the characters from the point of view of a dead victim, precious Susie. Susie tells us the story of her life and those in it, those that were affected by her mysterious disappearance and death and those that were never expected to be affected as much as they were. She remains in all these characters lives, looking down upon family, friends, and even her murderer.
Sebold has told quite a story on these pages and I highly recommend the book to one and all. It's a book that allows the heartache, but also inspires hope. It is also one that makes the reader possibly wonder . . . "Who may be looking down on me from their heaven?" And, it reminds those who have lost, that our loved ones are still with us . . . and that is OKAY!!
**Spoiler Alert**
Before I can close up this review, however, I feel that there is one topic that I wanted to discuss . . . the ending of Mr. Harvey. For those that have read the book, what did you feel about his death? Did you feel it just? Maybe a bit of retribution? For me, I wish that there would have been a bit more closure for the families. I know that in the real world, this closure does not always happen, so Mr. Harvey's demise may be truly realistic. Bodies may not always be found. Murderers may not always be caught. Knowing this and just having my own personal wish for a little different ending for the man creates in me very mixed feelings. I was glad that the final girl was saved her life. I felt that those in Susie's life knew that Harvey was a guilty man from his sudden disappearance. But for me, I just don't know if that is enough for all those other victims and their families and friends. I wanted more! I wanted a more public justice! But, then I think . . . some of the best books are those that have "real" situations within them. And, I believe this to be one of the best!

Want another opinion?
Book Journey
Posted by Tif Sweeney at 10:25 AM