My Sister's Keeper by Jodi Picoult 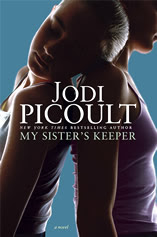 My Sister's Keeper is one of my latest favorite reads!! Honestly, I am so impressed with Picoult in general that I cannot wait to read more by her in the very near future. The author has such an amazing talent for capturing her audience and keeping us interested, particularly regarding some very controversial yet very human dilemmas.
In this amazing novel, the topic of "designer babies" and ultimately, stem cell research is put forth. Anna, one such "designer baby" was conceived for the purpose of being an exact donor match for her elder sister, Kate who is suffering from a form of cancer. Anna decides to seek out an attorney, Campbell Alexander to represent her case of becoming medically emancipated . . . meaning she can make her own decisions for the sake of medical purposes. However, add the twists and turns of a delinquet brother into the mix, battling parents, an attorney with his own personal issues, and even the guardium ad litum with an emotional investment in the case and you have one amazing story. Be ready for quite the roller coaster ride!!
**WARNING: SPOILER ALERT** Though I still stand by my earlier comment that this is one of my more favorite recent reads, I must say that I am still very disappointed in the ending of the book. It is so tragic, so sudden, and so much of a let-down in my opinion. In fact, I often wonder if the author was just trying to not push a specific agenda and ended it this way because it was just easier than not having to make the immediate decision and opted for the tragedy instead. It makes me wonder, what if Anna had been able to actually make the choice? What would the relationships have been like between those remaining characters who had lived? I don't know . . . I just feel very sad that Anna had lived her entire life for the sole purpose of saving her sister, even in the end. What would it have been like in the end if she was able to break free just once and do something that she wanted? Afterall, she was one very wise teenager!
Posted by Tif Sweeney at 12:41 PM