Rag and Bone by Michael Nava 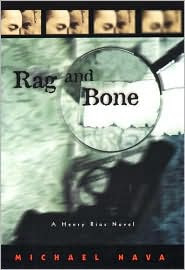 I have a confession . . . Do you know those bargain book shelves in bookstores? Those ones that books are marked down to just a few dollars? Or, even library book sales where you can find books for only a quarter? Well, I love deals and have a hard time denying a steal on a book!! This is where I find a ton of new authors that I have never read before or even some of the oldies and goodies!! In fact, this is one book that I found on one of those bargain shelves. For only a few bucks, I couldn't pass it up!
Anyways, on to the book . . . this is actually the final book in a series about Henry Rios, a gay Mexican-American lawyer in southern California. Though it is a series, I did feel that it is a book that can easily stand alone. You can read this one without having to read the others . . . but then again, I haven't read the others, so I don't know if I am missing out on something either! As a quick synopsis . . . Henry suffers from a heart attack, causing his once distant relationship with his sister to begin to mend. She discloses to Henry that she had a daughter and gave her up for adoption. This daughter, who now has a son, suddenly appears back into her life while Henry is recovering and brings with it a very complicated relationship. The daughter is accused of murdering her husband and Henry decides to represent her as not only her defense attorney, but also fights for her as her uncle and family.
Though the book centers around the story of Henry's newfound niece and grand-nephew, I really did not think that was the main point behind the story. I personally was more interested in the relationships amongst all the characters! Henry, the loner after the death of his previous partner, who once again finds love. Henry, who discovers that there is more to life than he had previously expected and whom he discovers through his interactions with his grand-nephew. The strained relationship between mother and daughter after being re-united (especially under tense circumstances) after an adoption and the stories of each involved. The power of family . . . the fact that you have to love them, but you don't have to always like them!! :)
Overall, I have never read a book quite like this, but I really did enjoy it! It was interesting to get into the culture that was represented. The author did a great job of grabbing and keeping the reader's attention. And, most of all, I think he did a great job of getting the reader to relate to the characters! If you don't already, I highly recommend that you step outside of your comfort zone and explore a world different from your own. There is so much to learn and experience and this book definitely did that for me!
Posted by Tif Sweeney at 8:50 PM