I have read a few of Crichton's books and have loved them, but I just got around to reading Jurassic Park and The Lost World. I loved these movies, particularly the first one and was curious to know how the books were. Typically, the books are better than the movies, and this was definitely true of these! 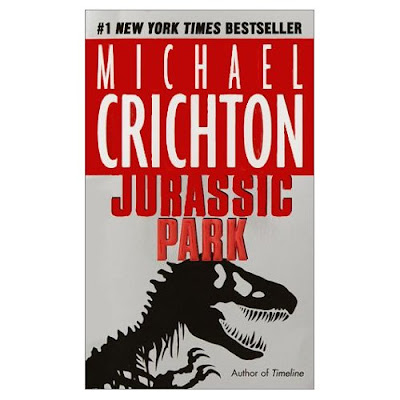 When I decided to read this book, I had some pretty high expectations. I have seriously seen this movie at least a hundred times. In fact, it is probably one of my top ten favorite movies! So, needless to say, this book had a lot to live up to! After I finished reading the book, I thought . . . "Wow! This was much better than the movie!" I could totally see why the book was made into a movie! It was full of action, not as much romance as the movie may have portrayed, and definitely more technical is some parts than the movie. Though I will say, less technical than some of the author's other books! The movie stuck fairly close to the book, with many of the scenes or details that were left out from the first movie placed into the third one. Some of the minor characters in the movie definitely had a larger part in the book. And, the raptors were definitely more frightening in the book than in the movie! I didn't think that this was possible, but the scene in the book was horrifying to me!

The Lost World
As soon as I finished Jurassic Park, I figured that I might as well read the sequel immediately after it. The whole concept would be fresh in my mind and I would not have to revert to looking details up if I needed to. The nice thing about this was that it was good to have the basic background easily accessible in my mind, but the story line was definitely it's own for the most part. It was much, much different from the movie, which honestly, I was thankful for. In my opinion, this was the weakest of the movie trilogy. Fortunately, the book was much better. I don't know -- maybe it was because of all the technical conversations involving Ian Malcolm or maybe it was because Malcolm was not made to be the hero like he was in the movies. Personally, I always have a soft spot for heroes that are feminine or children and I really believe that the heroes of the book were truly that! The character, Dodgson, introduced in the first book was expanded upon in this sequel, definitely clearing up some of the confusing details in the films. And, seriously, the New York scene that was so King Kong-ish in the film did NOT actually happen in the book. Thank goodness for that! :)


Overall, I loved these books. If you want a light read, these may not be the books for you. Crichton is quite an intelligent man and always does extensive research in writing his books, oftentimes using scientific and subject-specific jargon that can tend to get confusing if you are reading to only skim the surface. But, if you want a good book that you are not afraid to get involved in, crazy jargon included, this is the book and/or the author for you! I know that I always have a Crichton book on my shelves to read!
Posted by Tif Sweeney at 10:28 AM