MY RETURN: Life is Like a Game of Baseball

I have had this piece in my head for months, bouncing around, brewing, and evolving. It finally came time to write it. It's personal and raw, in an analogous sort of way. It stirred up a lot of emotions, and as I sat here deciding whether to publish it and send it out into the world, a weight was upon my chest while I debated if it was the right thing to do. Well, I made my choice, and now that weight has lifted.

After all, in real life I wear my heart on my sleeve. Today, I give you all a piece of my heart online. 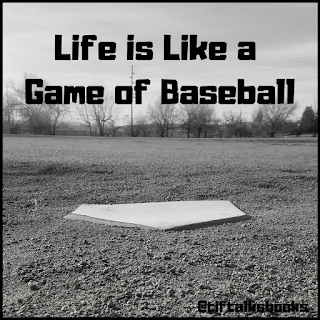 I was just hanging out in the dugout, cheering on my team. I was the one that cheered the loudest. I was the one encouraging as times got tough and the game was close. I was even the one cleaning up as spit, seeds, and trash hit the floor. Then, a shift occurred.

It occurred to me that I was taking the roles of the coach, the janitor, and the fans, but what I really was was just one of the team. I didn't have to do it all, and I deserved to be treated as an equal. I needed encouragement when I was playing out on the field. I needed support as I went up to bat. And, I was up next on the roster.

As I slowly walked up to home plate, I gripped the bat tightly with sweaty palms. I was scared and nervous as I stood there staring down the pitcher. I stood there realizing that all I heard was silence. I did not have the rest of my team cheering me on, and I never really had.

My eyes met the pitcher's. We stood there, I trying to read what was to come, him trying to decide which strategy to move forward with. I knew with all my heart that a curve ball was coming. I adjusted my stance. I turned slightly to ensure that when the bat met the ball, I would not hit it foul. I took a deep breath, slowly inhaling through my nose. When I didn't think I could inhale any longer, I paused and breathed in slightly deeper. He began to curl in upon himself, readying to throw, and I slowly released my breath, closing my eyes for my own silent moment of encouragement. When I opened them, the ball was flying my way. I could see it begin to curve, even more than I had predicted. I could imagine the bat connecting with the ball. I felt the air as the ball flew past me. It didn't matter if it was called strike or ball.  I had chosen not to swing.

I looked at the pitcher. Our eyes connected. I knew my time on this field and on this team was done. Because we were not on the same team. He had been playing against me all along.

I came to the conclusion that I simply don't like the game of baseball. I called myself out. It was time to move on.

It has not been easy. Honestly, it has been damn hard. I left behind my team. I hit the road on my own, alone with my two most prized treasures and my inspiration. Along the way, I have discovered that I have more fans in the background than I realized. I have had unexpected surprises. I have had to rethink my priorities, my desires, and my future. I realized that I may have been playing the wrong game, but there are other games out there that will be a better fit for me. I breathe deep every morning I wake and every night before falling asleep. I savor the new sights and sounds around me. I am on a new adventure, and I will continue to stand tall, even if I stand alone.